Outlier – The Story of Success 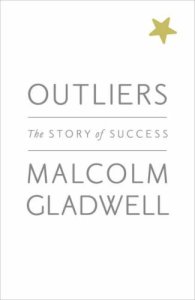 At last, a book which makes you think!

I love Gladwell’s book. I read The Tipping Point last year. I felt helpless about what I can do to change the world or my life in The Tipping Point, but with Outlier it seems to offer an insight where I could analyse my past and take future corrective actions.

I have suspected long time ago that hardwork and ability, even intelligence is not the only recipe for success. Gladwell confirmed it.

The things I agreed with

There are interesting findings about selection of Ice Hockey team, if the cut-off date is 1 Jan, apparently those born on the earlier months of the year stands an advantage. I am born in 2 Jan, I suppose all those years at school my teachers had confused my “maturity for ability.” Then again I can’t say the same for a friend who is born in 9 Jan. 🙂 Also interesting findings on why the man-hole is round. 10,000 hours of practice is the pre-requisite to mastery. Intelligence has a threshold. IQ scores matters up to a certain point. A discussion about practical intelligence versus IQ. Don’t expect to find anything new here, Dr. Daniel Goldman explains it better. Talent mostly likely squandered in times of great economic crisis, e.g. The great depression. I believed my talent is squandered right now in this financial and economic crisis. Turning adversity to opportunity- I wholeheartedly agreed that we do not need to shy away from talking about race and ethnic, acknowledging cultural legacies and deficiencies paved the way for planned approach to shape desirable behaviours (for example: the improvement achieved by Korean Air). I agreed with the findings of culture of honour (where inhabitants take the lives of people they know out of revenge and mostly because of verbal insults) originates from people of the highlands where they are most likely to be a herdman. I won’t spoil the story. But this theory is also true for the Arab Amirs (Bedouins) and the Afghans, although the book didn’t mention my examples.

I am glad that Gladwell mentioned air crashes. My husband and I are fascinated about the National Geographic channel air crash investigations series. Mentioned any famous crashes, I would most likely know what is the cause of the crash. Interestingly Wikipedia stated : An accident survey of 1,843 aircraft accidents from 1950 through 2006 determined the causes to be as follows:

Gladwell divulged his family history in the final chapters of his own cultural legacies. Outliers are not outliers at all, they are products of history and community, of opportunity and legacy. Their success is not exceptional or mysterious (In my opinion, still debatable). It is grounded in a web of advantages and inheritances, some deserved, some not, some earned, some just plain lucky (This I totally agree).

The things I do not agree with

There are however some flaws:

I am not saying that Gladwell’s findings are the gospel truth but it is a book that open your eyes and makes you think differently. That for me is a noteworthy book. If there is one thing to take away from the book, it is this:

acknowledge your cultural legacies and take steps to overcome it.

A bookaholic that went out of control.... I eat, sleep and breathe books. Well, lately I do other stuff.
View all posts by JoV »
« “Cheap” Books
Restriction to Read »

5 thoughts on “Outlier – The Story of Success”