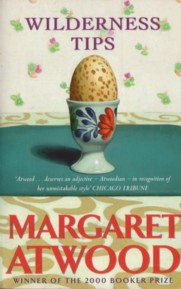 This is my first for Margaret Atwood. I think it is always good to read an author which has lived through 7 decades. You feel there is a certain generation gap, you have a little glimpse of what’s life for a woman is like just 3 decades before, the most important thing is that you also learnt a lot of wisdom from Atwood.

There are several common themes that run across the stories. The women almost always smokes. Most of them got involved with a married man in a dead end relationship. The male characters are mostly spineless and detestable. Always a fetish for the characters to have funny names and nicks. Two stories talked about unearthing hundred years old preserved ice man. Three stories about wilderness, camping, loons and Red Indians. Most stories are set in the backdrop of Toronto (where Atwood resides). A transformation always occurs when a man was shaped by a love affair, or a woman because of age. Most stories seems to span more than 2 decades, as if truth will always revealed through the test of time, no more words or explanation needed, with a chance meeting after several aoens or zeros and eggs (the zero behind the years) of years had gone by. Truth will always revealed alright, chance meetings? I am not so sure about that. As far as real life goes, there are not many coincidences and serendipity for me.

It is a story of a group of teenage boy campers and their counsellors, and a group of waitresses working at the camp. The waitresses spent time skinny-dip and reading trashy novels about romance. The waitresses also make out with the counsellors and teenage boy, Donny infatuated with one waitress named Ronnette. Easy Ronnette fell pregnant and decides to keep the baby, she told Joanne that it is not one of the counsellor, Darce’s. Whose could it be? It is quite predictable actually. 11 years on, grown up Donny met Joanne and decided to go for a drink. Donny told Ronnette was really nice to him. Joanne stood at the edge thinking whether to tell Donny the truth or not. But it’s an archaic story, a folk-tale, a mosaic artefact. It’s a story that would never happen now.

Kat had an ovarian cyst operations. She insisted in keeping her tumour and named it Hairball. It is quite gruesome, with hairs and fragments of bones and nails, and five perfectly formed teeth. In childhood she was a romanticised Katherine. then a round faced Kathy, at uni she was Jeans-clad Kath, when she went away to London, she is Kat, as promounced in KitKat. She works as a editor in London and was offered a job by Gerald (later nick as Ger) as head editor in Toronto. Kat had a twisted taste which does not quite go along with the Board of Director’s aspiration for the magazine. Kat and Ger were having an affair and Ger is married to Cheryl. While Kat is off to the operation theatre, Ger took her place and fired Kat. Kat dressed her hairball as chocolate truffle and send off as a gift to Cheryl, surely to unwrap it in her celebration party in front of her guests.

Richard (professor of literature) obsessed with Greek mythology is infatuated with Selena on one of the poetry nights with Selena poetry and guitar strumming. Richard wanted Selena, but she rejected. She showed up one day at Richard’s doorstep and asked to be accommodate for a night. Richard’s wife, Mary Jo, went berserk. One day again Richard saw a delirious Selena, she couldn’t recognise him anymore. Few months after, she is dead. Richard decided to write a mythological book about her. We never know what happened to Selena, except that in Richard’s eyes she is diaphanous, like angel or a fairy.

The Bog Man (my favourite)

Julie broke up with Connor in the middle of a swamp. Conner said there is a difference between a swamp and a bog. Swamp is when the water goes in one end and out the other, bog is when it goes in and stays in. :p Connor is an elderly Professor in Archaeology who is having an affair with his young personal assistant Julie. Julie looked up to him like a demi-god. In a trip to island of Orkney, Scotland to unearth the bog man (similar to the Lindow man I saw in Manchester Museum). Suddenly Julie did not see Connor as demi-god anymore. Her sudden appearance at the bog in front of Connor’s colleagues seems to change all that. She left without a word. Connor hunted her down, on the verge of hugging and breaking a phone booth, desperately wanted to keep her, perhaps out of his desparation to reclaim his youth. Many years later Julie recalled this episode in her life a story of stupidity and innocence, where Connor ceased to become promiment and more flatter and leathery, and more dead in her faded memories.

Lois once had a rich summer friend named Lucy. One day they went on a canoe trip with their counsellors and Lucy wanted to go off to pee and vanished into the thin air. No body was found, not sure if Lucy had jumped off the cliff or lost in the woods. But Lois is haunted by the suspicion of the other campers of her and Lucy’s disappearance. Now she collects landscape paintings of the lake and the forest, similar to the ones she went canoeing with Lucy; imagining Lucy calling out from all corners of the landscape paintings.

Susanna was always the centre of attention of her 3 uncles (Susanna mother’s brothers). The aunties loathed Susanna and mother because they feed on money given by the 3 uncles. Afte graduating from school, Susanna found a job in the local newspaper writing orbituaries. Susanna met Percy Marrow (Vedge) at the newspaper, soon she was having lunches with him sharing ideas on writing and articles. Percy suggested that maybe Susanna should try out for the women’s column. Women was beginning to create a fuss in the modern world. Percy then asked Susanna if she wanted to work for the radio station. She quickly gain a wide audience, hosted her own TV show and marry rich man Emmett. Percy left the newspaper and published “Stellar Heights” a sleazy tell all about the celebrities he known, one of them is Susanna. She felt betrayed by Percy whom she regarded as a close friend. Always wanted to be liked, she remembers her recital, her show-off and grinning like a trained monkey making a fool of herself in front of her uncles. She might be hated.

The Age of Lead (My favourite)

A 150-year-old iceman was dugged out from the earth. Jane and Vincent grew up together. First platonic then lovers, they were first best friends before they became lovers.  They dated other people, parted and came back together again. They tried to be a lovers but were not successful. At 43, Vincent had a strange illness. As Jane mourned the loss of Vincent, the iceman was found to be poisoned with lead.

The protagonist (can’t find her name anywhere as the story was narrated in first person) set up a sheltered home for battered woman with her good friend, Molly. She seems to be going out with married men cajoling them to support her good cause. While Molly got married to Curtis at 30, who has a severe mental problem. One of the thing she said about her good friend was that Molly is a fixer, she thinks she can fix things. It was not sadness that killed her, but hope that made her stayed with a sick man, who at the end took her life.

I no longer thinks that anything can happen. I no longer want to think that way. Happen is what you wait for, not what you do; and anything is a large category.

I’ll say to Molly, we don’t see eye to eye on some things and you wouldn’t approve of my methods, but I do what I can. The bottom line is that cash is cash, and it puts food on the table.

The story is about George who goes out with Prue, who has one prissy, intellectual elder sister named Pamela; and a naive, eager to please, a favourite of brother Richard, younger sister Portia. Prue is the immoral and promiscious one who lied and had an affair with George even when he already decided to marry Portia. George picked up a book written in 1905 about surviving in the wilderness called, as you guess it, the title of this book. The story ended with the suspicion of Pamela and George in the boathouse together, with Portia denying that this would happen again and again.

Marcia is a freelance writer who is married Eric a political activist. Gus a young man in the office flirts with her, and life was drifting by with her going about her normal routine in the office and preparing for Christmas. It is a story about loss time, grown-up children and how one feels about ageing.

Every woman sees a little bit of herself in her stories. I see myself as Joanne in True Trash who seems to be a receptacle for men to pour their hearts out but never an object of desire. In Hairball, I relate to the time when I kept a piece of polyps that was operated from my nose and kept it for one year in my bedroom, until I decided to dug a hole in front of my garden and buried it with a seed, hoping that it will grow into a tree that commemorate the event. I see myself in Jane in The Bog Man, when my eyes are coloured and saw that someone with perfection, disenchanted a few years later only to see him as a shallow and an annoying chatterbox. An episode of my life’s stupidity and innocence is also recollected. I saw myself in Age of Lead when I had a best friend which never became a lover. In Weight, of thinking about the bottom line and about cash putting food on the table and went off to do something else different than what I initially thought. And now, I start thinking about the effects of ageing in Hack Wednesday and what I am going to do when I get to be that old?

Man booker prize winner 2000 for Blind Assasin, shortlisted 1997 for Alias Grace; Atwood writes with underrated style, haunting, spot-on, cynicism and insicive. This book has been a delightful and chewable read. I am sure this is not the last of her books that I intend to read.

A bookaholic that went out of control.... I eat, sleep and breathe books. Well, lately I do other stuff.
View all posts by JoV »
« Restriction to Read
Go buy your own book and deface it! »