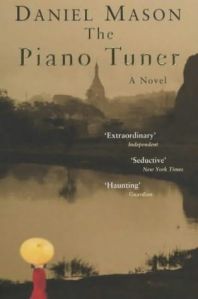 It is my deliberate choice to start another book with a piano theme. A pure coincidence both The Piano Teacher and The Piano Tuner sit on my TBR pile, but a deliberate decision to read them back to back.

On a misty London afternoon in 1886, piano tuner Edgar Drake receives a strange request from the War Office: he must leave his wife, Katherine, and his quiet life in London, and travel to the jungles of Burma to tune a rare Erard grand piano. A grand piano made by Sebastien Erard in 1844.

The piano belongs to Surgeon-Major Anthony Carroll, an enigmatic British officer, whose success at making peace in the war-torn Shan States in North East of Burma is legendary, but whose unorthodox methods have begun to attract suspicion. Myths surround Dr. Carroll. He first found fame when he succeeded in mobilising the local chief’s army by reciting Shelley’s ‘Ozymandias’ to him; he survived an ambush by taking a tin whistle from his hat and charming his attackers with a colloquial love song. He has been granted the piano in the heart of the Burmese jungle on the understanding that Bach and Schubert might be key weapons in Britain’s attempts to win the hearts and minds of the native population.

Edgar, seduced by the idea of tuning an Erard in the far east, set sail across the continents. Across Europe, the Red Sea where he met a middle eastern man who knows of one story and tells of how he became deaf after listening to a strange sound in the desert; across India and Burma, and into the remote highlands of the Shan states to the British fort in Mae Lwin, where Surgeon-Major Carroll is expecting his arrival.

En route he is entranced by the Doctor’s letters, the daily lives of Burmese and the botanical excursions. He is also faced with the brutality of life, the death of unintended victim of a hunting expedition, an attack by the dacoits, the sight of diseases and death, and his near death experience when he is infected with Malaria.

As his captivation grows, however, so do his questions: about the Doctor’s true motives, about why he came, about an enchanting and elusive woman, Khin Myo, who stirs a strange emotion within Edgar that he never felt before. His steps became a little flighty, his laugh a little louder, his cheeks flush a lot more in the strange land…

This book stirs a strange emotion in me as well, the mere mention of a piano takes me back to my childhood and adolescence. I have an old upright Robinson piano, which is grossly neglected by the previous owner. It is so old that no matter how the piano is tuned, a few weeks later it falls back in its old quirky ways. The sounds of my piano keys are never perfect. I learnt a lot more about the techniques of piano tuning in this novel. A piano must be tuned several times usually, he said, as the act of tuning one string changes the dimensions of the soundboard so as to affect all the other strings. Tune roughly the first time, regulate, and then tune again (my piano tuner only shows up once). The hammer felt needs to be checked and repaired (mine is all worn out, no one suggested a repair). A piano is most affected by humidity (you don’t say!) and an off-tuned key play in this case increased in pitch and plays like a sharp key. The dry season, however, will have resulted in the soundboard shrinking, loosening the strings and dropping a pitch.

Edgar always worked slowly, loses himself in his work. But here in Mae Lwin, he was surprised by his own deliberation. In a matter of hours he would be done with tuning and no longer needed in Mae Lwin. Surely he wants to go home? Go home to his lovely wife. He had been away from home for too long. But he reminded himself there was no need to rush things either. Besides, he just arrived.

For Edgar had learned early that being needed was not  the same as being accepted. Although he was a frequent visitor to upper-class homes, where the owners of expensive pianos often engaged him in talk about music, he never felt welcome. And this distinct sense of estrangement extended in the other direction as well, as he often felt awkwardly refined in the presence of the carpenters or metal smiths or porters whom he frequently contacted for his work. Perhaps, he feels differently in Mae Lwin….

Once Edgar finished tuning the piano, he was asked to play (despite his vehement protest that a piano tuner is not necessary a pianist!) for the sawbwa of Mongnai, one of the leaders of the Limbin Confederacy, with whom the British forces under Colonel Stedman have been at war for the last two months. He played a Bach’s prelude and fugues collections of The Well-Tempered Clavier, a piano tuner piece in his opinion, a piece bound by strict rules of counterpoint, as all fugues are, the song is piece destined to follow the rules established in the first few lines, to present the beauty that is found in order, in rules – a piece that many in England would have dismiss it as too mathematical (I tend to agree!).

As days turned into weeks, weeks turned into months, we are, like Edgar, drawn into a Burmese lullaby of scenic highlands, lush verdant greeneries, cheerful laughter of women and children bathing and washing by the shimmering beauty of Salween river under the sun. The writer, Mason expends long paragraphs describing the scenes, the people, and Edgar’s long correspondence to his wife, and how the Erard Piano is transported through the jungles and out of the jungles etc……

Who is Captain Anthony Carroll? Is he a British patriot who mediates war between the Shan tribes for the good of the British Empire or is he a traitor? Is Khin Myo seduction real or a mean to persuade Edgar to stay longer? Is it true what is happening with Edgar, as in The Odyssey, once you feed on the lotus, you forget the way home and prefer to stay with the lotus eater? Is Edgar’s idea of paradise a figment of his imagination as external force threatens to annihilate the inhabitants of the paradise?

A beautiful novel and a great way to lose yourself in the Burmese jungle, set in another time.

What I like most about the novel: historical well researched, a feel for the brutal politics of colonialism, to create a complex and subtly imagined adventure.Read like a classic. Write like a pro. An accomplished and sensitive novel for a debut writer.

What I like least about the novel: The unravelling of doubts and mystery was treated with haste. This book has no definite answer with a tragic and abrupt end. Enjoy the journey, don’t mind the destination. 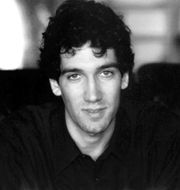 Daniel Mason, a 26-year-old American, began writing this, his first novel, while studying malaria as a biology undergraduate at Harvard in 1998, on the Thai-Myanmar border. One afternoon, he notes in a postscript, he journeyed south into old Burma aboard a long-tailed boat on the Salween River, which runs into the Irrawaddy. At the remotest little village trading post on the banks of the river, cut off by jungle, ‘a strange sound,’ he recalls, ‘rose up from the thick brush. It was a melody, and before the motor kicked in and we moved away from the shore, I recognised it as the sound of a piano’ At the publication of this novel in 2004, Daniel Mason is a medical student at the University of California, San Francisco.

A bookaholic that went out of control.... I eat, sleep and breathe books. Well, lately I do other stuff.
View all posts by JoV »
« The Piano Teacher by Janice YK Lee
Intercultural Marriage, not for the faint hearted »

7 thoughts on “The Piano Tuner”