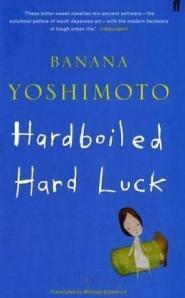 The benefit of reading a long list of book recommendation such as 1001 books you must read before you die is to stumble upon weird author’s names or book titles that you remembered vaguely being discussed in book blogs or reviews.The name Banana Yoshimoto is one such.

This book contains two novellas. The first one is about a woman who is out walking, passes a strange shrine, checks into a weird hotel. The woman state of mind vacillates between reality and in her dreams and reminisces about her female friend and lover who died a year ago.

As fond as I was of her, I wasn’t confident that I could love her enough to stay with her, to go on filling the dark, lonely space she carried within her. I knew that someday I would fall in love with a man, and what I could do to her then would be even worse. So I didn’t call her.

The second one is about a woman and her relationship with her sister, Kuni, who is in coma. Kuni’s fiancé leaves her after the incident, but his brother, Sakai (A tai-chi teacher) continues to visit. About the sorrow and waiting for imminent prospect of death that surrounds you when a close one dies.

I have always found it relatively easy to keep my emotions in check. I stop being able to savour, even in the secret recesses of my own mind. Kuni used to say that if I was able to do that, I could really be very deeply in love.When you’re in love, she once said, it really hurts, it aches, and you can’t suppress it, you want to see it through to the end even if it means that someone has to die, and so you end up causing a whole lot of trouble for everyone.

I was once like that, when I was younger. But I no longer want to go back there, that emotional state. What an awful way to live!

Both stories have young female narratives and they are quite similar, living in the shadow of another woman whom they admire. At the same time they are trying to come to terms with their own identities and their future path in life. I particularly like the second story, as Yoshimoto intricately dealt with the dread of death sensitively and beautifully.

I agree. I’m sure things will never be harder than they are now. My mother doesn’t really have a cold, you know – she’s just feeling really down. But I know that sometime in the future, a day will come when my family will start to feel differently. The world out there, this landscape we’re looking at now, through this window, will start to seem good to us, and different from the way it is not – so different that we aren’t even allowed to imagine it yet. It’s just that I’m tired of waiting. Because n the early days, I was always waiting for a miracle.

And that a day would come when people and their brains would each die a separate death.

Death isn’t sad. What hurts is being drowned by these emotions.

Her prose is sparse, but the meaning is not. When I picked this book off the shelf, I’m not sure if it’s the one listed in 1001 books. But since it’s isn’t, at some point I will read “Kitchen” soon. All her books are stuff that you can read in one sitting. No sweat. 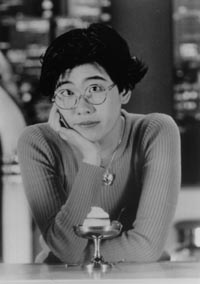 I am reading this for A to Z challenge.

Banana Yoshimoto (よしもと ばなな, Yoshimoto Banana) (born July 24, 1964, in Tokyo) is the pen name of Mahoko Yoshimoto (吉本 真秀子 Yoshimoto Mahoko), a Japanese contemporary writer. She graduated from Nihon University’s Art College, majoring in Literature. During that time, she took the pseudonym “Banana” after her love of banana flowers, a name she recognizes as both “cute” and “purposefully androgynous.

A bookaholic that went out of control.... I eat, sleep and breathe books. Well, lately I do other stuff.
View all posts by JoV »
« Of Mice and Men by John Steinbeck
The Islamist by Ed Husain »