A Thousand Years of Good Prayers

I love short stories, but I have my qualm about short stories. I don’t always get the ending. Sometimes I feel like I’m left with a cliff hanger and with so many questions on my head that it bothers me for weeks. More often I come out of it feeling like “That’s it?” Jhumpa Lahiri is not excuse from the flaws mentioned, but when it is wrapped up nicely, short stories are concise and spot-on. Essence of Li’s short stories are spelt out in not too many words and I feel like I have a short story collection that I would like to keep. This is one such book, and a quarter into David Malouf’s Every Move you make looks promising too.

Every short story contain in Li YiYun’s book speaks of multi-facet cultural and social issues of the Chinese Society. It is written in lucid prose, and for a non-native English writer, she writes eloquently and not a trace of clunkiness that I usually find in foreign writers writing in English, not that it matters, but it was an observation. It’s her debut story collection and it’s been compared to literary greats Chekhov and Alice Munro.

Here’s the gist of the stories:

After a life: illuminates the vagaries of marriage, infidelity, parenthood, and gender, unfolding the story of a couple who keep a daughter hidden from the world with devastating consequences.

I particular like one passage when Mrs. Fong was so angry with her husband’s ludicrous proposal that she lamented:

“Over my dead body, and he cried and begged and said all these ridiculous thing about opening one’s mind. Many households have two women and one man living in peace now, he said. It’s the   marriage revolution, he said. Revolution? I said. I said it’s retrogression. You think yourself a good Marxist, I said, but Marx didn’t teach you bigamy. Chairman Mao didn’t tell you to have a concubine!”

Immortality: winner of The Paris Review’s Plimpton Prize for new writers, tells the story of a young man who bears a striking resemblance to a dictator and so finds a calling to immortality. With the Chinese Nation’s history as backdrop, the face of this young man and his fate is perceived differently through the change of time. I thought it was ingenious as it is told in such heartbreaking tenderness about the pride and arrogance that the young man hold himself as being the shadow of resemblance to the dictator’s face and his eventual slump towards unpopularity as the dictator weigh less and less in the contemporary eyes of the Modern China.

The princess of Nebraska: is about a man and a woman who were both in love with a young actor, Yang who is a Nan Dan, a man who performs in a female role in Chinese Opera. They both love him in China meet again in America and both tried to reconcile the lost love with their new lives and trying to help Yang fulfil his desire to perform again.

Love in the market place: Sansan and Tu are supposed to get married. Because of the American green card, arrangement was strike between Sansan, Tu and Min to get all of them abroad to America, except one of them break the promise and the effects it has on the ones whose dream is broken. What struck a chord in me was the moment she finally met a man “who understand what a promise is” and I am both amazed at the horror and glee about the encounter.

Son : tells a story about a son, Han, who came back from America to visit his mother. His mother is trying to fix him up with eligible young single women so that he could settle down in marriage. Unfortunately, Han is a gay and has to break the news to her hopeful mother.

“Admit it, Mama. I’m doomed. Whoever your god is, he wouldn’t be fond of people like me.”

Of course, Han wants to make a joke. Her god is just like a Chinese parent, never running out of excuses to love a son. But he stays quiet when he looks up at his mother, her eyes so eager and hopeful that he has to avert his own.

“You’re wrong,” Han’s mother say. She stands on tiptoe and touches his head, the way she used to touch his head when he was younger , to reassures him that he was still a good bo even after he did something wrong. “God loves you for who you are, not what others expect you to be.” She says. “ God sees everything, and understands everything.”

The arrangement: Ruolan is a product of a marriage void of love. Her mother is mean and she can’t wait to leave home. There is one elderly man who might be the key to help her with this goal, Uncle Bing. For years, Uncle Bing, Ruolan’s mother friend, always shows up at her house. Would uncle Bing agree to this arrangement?

Death is not a bad joke if told the right way: told through the eyes of a girl whose nanny was Mrs Pang. It’s about Pang family and others who had suffered through the cultural revolution. Bad luck always chooses a good man. It’s about dying with dignity, dying for a belief.

Persimmons: Told through idle chatter of a group of men, Lao Da is someone who defy the authority of Birth Control office order to pay penalty  for his second child. Trying for a son after three girls is what Lao Da and his wife wanted. What right he fought hard to preserve, he soon loses it and Lao Da lost his mind and took a drastic action because he wouldn’t stand t be a “soft persimmons” for the rest of his life.

A thousand year of good prayers: in which Mr. Shi, self proclaimed nuclear scientist, visits America for the first time to see his recently divorced daughter, only to discover that all is not as it seems.  Mr. Shi sat nattering to a neighbour Iranian lady telling her things about his past that he wouldn’t tell his own wife and daughter.

A foreign country gives one foreign thoughts, he thinks. For an old man like him, it is not healthy to ponder too much over memory. A good man should live in the present moment. 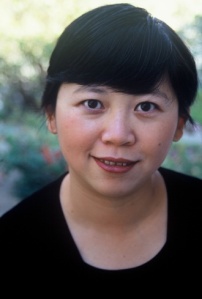 Rating: 4.5/5
Li’s stories are distinctly Chinese. Boldly explores the effects of Chinese beliefs and cultures on language, faith, and an entire people, underlining transformation in its many meanings and incarnations. Reading and writing about the adverse effects of Chinese Communism has become a cliché, but because it’s told with such subtleness in Li’s short stories’ characters, I ended up feeling for the characters rather than brush them off as another victim of Communist circumstances. So it’s good. I’ll eat anything she serves on her next book. 😉

I’m reading this for A to Z and China Challenge.

Yiyun Li grew up in Beijing, China and moved to the United States in 1996 to study medicine and begin writing two years later. After receiving a master’s degree in immunology from the University of Iowa, she attended the Iowa Writers’ Workshop and received an MFA in creative nonfiction writing. Her story ‘Immortality’ won the Paris Review’s Plimpton Prize for first ficiction and her stories and essays have been published in The New Yorker, The Paris Review, Glimmer train, and Prospect,  Zoetrope: All-Story.

She lives in Oakland, California with her husband and their two sons, and teaches at University of California, Davis.

A bookaholic that went out of control.... I eat, sleep and breathe books. Well, lately I do other stuff.
View all posts by JoV »
« Every dog has its day
Library Loot: April 28 to May 4 »

8 thoughts on “A Thousand Years of Good Prayers”