I was looking for an author with a last name Q. I don’t know many. While searching the library catalogue I came across Death of the Red Heroine by Qiu XiaoLong which is a crime fiction set in China, which I think is interesting. I picked The Silver Lining Playbook instead because it was featured in the TV Book club and it sounded quirky. Not very analytical in my choice, but good enough reasons for me to pick up this book.

And it’s the best thing I have done for a long time!

After reading so much serious stuff, misery lit, re-telling of myth…. This book…., this book is a breath of fresh air. I mean it. It made reading totally, 100% fun and thought provoking.

The story follows the recovery of Pat People, who is suffering from mental health problems following the breakdown of his marriage, returning to the home of his parents to live in their basement. His intention is to develop himself both physically and mentally in preparation for the end of his separation with his wife Nikki. This he does by exercising obsessively and reading various classics of American literature to become more literate. He noted many hilarious observation on some great classics, The Great Gatsby, The Scarlet Letter, Huckleberry Finn, The Bell Jar, Catcher in the Rye etc), He finds himself challenged by the books he reads as they do not seem to share this idyllic position and wonder why his wife used to teach such pessimism to high school students. 🙂

Pat is fortunate to have so many people around him who supported his recovery. There is his beloved mother who loves him, a grumpy father who stayed glued to the TV on football matches, brother Jake, his therapist, Cliff Patel who became his friend, his best friend Ronnie and wife Veronica, and Veronica’s weird, psychotic sister, Tiffany, who is also recovering from mental health issues.

The breakdown has transformed Pat, and despite his problems (including a perfectly understandable aversion to singer Kenny G) and hope that one day his wife Nikki will come back to him, he is on his path to recovery.

Pat believes life is identical to Hollywood films. The lesson he’s taken from them is that while life can appear hard and painful, if you work and believe hard enough in your goal the happy ending is inevitable.

Yes, I really do believe in silver linings, mostly because I’ve been seeing them almost every day when I emerge from the basement, push my head and arms through a trash bag – so my torso will be wrapped in plastic and I will sweat more and then go running.

As I run through the part, I look up and see what the day has to offer in the way of divination. If clouds are blocking the sun, there will always be a silver lining that reminds me to keep on trying, because I know that while things might seem dark now, my wife is coming back to me soon.

Quick is a very imaginative and humourous writer. One section that made me giggle on the train is a “montage” – much like those in the ROCKY films, as Pat prepares for a dance competition. One minute his family member is begging him to go to the football matches with the boys, another we have his dance partners making him crawl like ”you have no legs and you haven’t eaten for two weeks..”  on the floor, as he take in all the verbal abuses, as part of the dance routine. On the day of the competition, Pat protested the idea of him baring his torso for the performance….

The book is not all about comedy. The next thing that happened in the book was a description of Pat performing the dance with his dance partner which obviously has something to do with the sun. As the sun disappears, Pat finally understands what she means by crying through movement. She jumps, she rolls, she spins, she runs, she slides… And then she is lifted by Pat to the song’s crescendo and .. I found myself singing along with a heartbreaking famous song of the 80’s and while I sang I imagined the dance routine that Pat has performed and when he finally finished it, I found myself emotionally suck into the beauty and expression of the dance and vividly imagine Pat’s dance partner crying movement and expression of pain throughout the entire dance……….. it was that good. 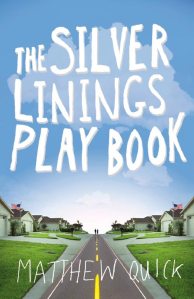 The novel is well calibrated, charming, heartwarming and hilarious. I felt sorry for Pat in many instances he has been misunderstood and wronged. I laughed at the innocence and quirkiness of some the characters. My heart went all warm and fuzzy when I saw how the people closes to him supported him in his most critical moment.

The voice of the Pat is sincere and convincingly pure in his intent “to be kind rather than right” and I followed his progress through recovery with trepidation and anticipation, wanting to know fervently if the silver lining for Pat is going to happen for real at the end.

It has all the right ingredients to be adapted as a Romcom (Romantic Comedy), and so it will be as I soon found out in the author’s bio later. Pat is dopey but loveable, occasionally he succumb to the noises in his head, unrealistically optimistic but well-intentioned and possesses a strong sense of right and wrong. As a first novel I think this book is a real achievement. It made me wants to go out and own a copy of it for the gloomy rainy days. I am tempted to re-read this in the future. It kept me smiling from the beginning till the end. It’s been a long time since I laugh so hard from reading a book. Although I didn’t like the ending as I think Pat deserves better, but it is an extremely very entertaining read. It will take a heart of stone not to like this one.

Have you read any funny novel recently? Can you recommend them to me? Thank you in advance!

I am reading this for A to Z Challenge.

In the six months that followed his leaving teaching and the Philadelphia area, Matthew floated down the Peruvian Amazon and formed “The Bardbarians” (a two-man literary circle), backpacked around the Southern Africa, hiked to the bottom of a nowy Grand Canyon, soul-searched, and finally began writing full-time. He has since returned to the Philadelphia area, where he lives with his wife and greyhound.

The novel’s achievement so far:

A bookaholic that went out of control.... I eat, sleep and breathe books. Well, lately I do other stuff.
View all posts by JoV »
« Early bird gets the worm
The Complete Book of Mothers-in-law by Luisa Dillner »

10 thoughts on “The Silver Lining Playbook by Matthew Quick”