The Complete Book of Mothers-in-law by Luisa Dillner 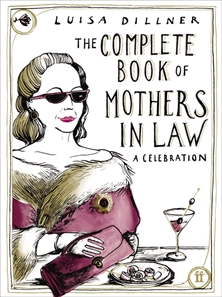 There have always been mothers-in-law and most of us will end up either having or being one. The role of mother-in-law has existed throughout the ages; a part that no one actively chooses and anyone would be forgiven, considering the negative stereo-types, for thinking it has little to recommend it. Mothers-in-law have been variously feared, loathed, ridiculed, appreciated and adored but rarely ignored. Historically you can find mothers-in-law of all varieties: admirable, loving, scheming, bad, divine (literally) or quite ordinary. The mother-in-law phenomenon is global.

One of my girlfriend is living with her mother-in-law for the time being and I’m doing a search on Amazon to find out some Mothers-in-law books to send her as a comfort. I like to read of browse a few that I think is good so this is the book I checked out from the library to have a look at it.

There are graphical illustrations between the pages, poems and song lyrics, letters, testimonials and top tips at the end to mothers-in-law and daughters-in-law how to behave amicably and even a recipe for a Mother-in-law Cocktail!

Historically daughters-in-law often felt desperately lonely and confined in their new homes. They poured their sorrow into songs and stories. Their light is summarised in the Japanese proverb: ‘The daughter-in-law who was bullied by her mother-in-law bullies her daughter-in-law in revenge’ whatever the reality, this sentiment has international resonance. It is repeated in similar sayings in many different languages. Mothers-in-law could also be kindly to their young daughters-in-law. Such behaviour was unlikely to inspire songs and poems, so it is the legacy of unkindness that endures.

Queen Victoria is the apotheosis of the British Empire, but how is she as a mother-in-law? What is the relationship between Queen Elizabeth II and Princess Diana? What does JFK’s mother thinks about Jackie O? What about the Tudors? This book offers you a glimpse into the lives of Royal and Presidential mothers-in-law, which I thought is the most interesting part of the book. This passage features contrast between Princess Diana and The Queen really really well:

Diana was from a broken home (which had fractured with tears and recriminations that hurt all the Spencer children) and of a generation that made her believe she was entitled to personal happiness. She married both to be happy and to wed a prince – not primarily to server her country.

The  Queen’s role has always been to serve her country as head of state – this is why she exists. She was bred for her role, her childhood rigidly controlled and largely devoidof contact with outside world. Courtiers have been quoted as saying she is not a tactile mother and has a presence that can be chilling.

Finally, a chapter on support group for tortured daughters-in-law and how internet enables that; and one small chapter on “Mad, Bad and Scheming Mothers-in-Law”. 😉

Lord Byron, Virginia Woolf, Caesar, Suad Amiry, Margaret Thatcher, reference to literary work about mother-in-law in Pride and Prejudice , about Debra with mother-in-law Debra in Everybody Loves Raymond comedy sitcom, the book is full of trivia and nuggets about Mothers-in-law that it will make you laugh, make you mad, make you think about your own relationship with your mother-in-law.

It is probably true that no mother wants to think her son can be at fault. One has a great deal of tribal loyalty and it is a great mistake to underestimate it.

Mothers-in-law are more likely than most people to arouse mixed feelings. Not quite family but close enough to matter, their position makes them vulnerable to falling in and out of favour. – page 129

Same goes for daughters-in-law. The older woman is giving up her “baby” son and daughter-in-law is the rival that took him away, i.e. the syndrome of “my tribe against your tribe”. Even with the best intention, this relationship started with the wrong foot. To be a friend to your mother-in-law is a gift, if you have received no such gifts, ‘thoughtfulness and restraint’ is key to harmonious relationship.

Lets us reminds ourselves that we have a far more interesting lives than our foremothers. So instead of whinging and hinging of the last string of attachment with the children’s married lives and the person (the spouse) that comes between the grown up children and their mothers, mothers should set their children free and begin an exciting life without them. Once I am geared-up to that, fingers crossed I will be nicer to my daughters-in-law, if I have one in the future.

As always I am thinking ahead of myself, I still have about 20 years to go till my boys are at marriageable age. 😉

As I said earlier on, although it is a non-fiction, it’s a very engaging read.  If the book won’t make you want to be a better mother-in-law or daughter-in-law at least you will have the comfort to know that you are not alone in this!

I’m reading this for non-fiction 5 challenge.

Luisa Dillner – is a columnist for the Guardian and works on new ideas for the British Medical Journal Publishing Group. She has been a contributor to many magazines and newspaper, including Vogue, Cosmopolitan,and the Observer. She originally trained and worked as a doctor in Bristol. She now lives in London.

A bookaholic that went out of control.... I eat, sleep and breathe books. Well, lately I do other stuff.
View all posts by JoV »
« The Silver Lining Playbook by Matthew Quick
Japanese Literature Challenge 4 and Library Loot 16-22 June »