Changeling is published in the USA 3 months earlier than UK. As you can see, the cover of the UK edition is beautiful, with sort of transfer sheet for baking with dotted yellow flowers as outer flap and the vertical title, a typical layout of the kanji characters seen in far eastern novels (In the background is some gift from my Canadian friend which consists of Moose droppings chocolates and Maple Syrup which comes in Maple leaf-shaped bottle. 😉 I handle the book with extra care and savour flipping the pages of a new library book, which I have the privilege to be the first one to read it.

The novel revolves around the relationship between two gifted artists, Kogito Choko, a novelist and alter ego of Oe himself and Goro Hanawa, Kogito’s brother-in-law, a film director, are best friends. While their friendship has become strained in the past few decades, they have developed a means of communication through a set of tapes that Goro sends to Kogito, who then plays them back over a tape recorder with a headset that he named “Tagame,” or beetle.

One night, Goro tells Kogito that it’s about time that he, Goro, went to the other side, and then Kogito hears a loud thud. After a moment of silence, Goro’s voice continues: ‘But don’t worry, I’m not going to stop communicating with you.’ Moments later, Kogito’s wife, Chikashi, rings to tell him that Goro has jumped to his death from the roof of a building. Kogito begins a search to understand what drove his brother-in-law to suicide.

Seriously, though, if the soul is able to detach itself from the body in that way, then the spirit must not be aware that it’s dead. So what dies is just the body, and at the moment when the flesh ceases to be alive the spirit goes is own way. In other words, the spirit goes on living forever, divorces from the body’s finite sense of time and space. To tell you the truth, I don’t really understand it myself, so I’m just groping around for an explanation. But I think that just as there’s infinity and also a single instant in time, and just as the entire cosmos can coexist with a single particle, isn’t it possible that when we die we simply move into a different dimension of space and time? If that’s the case, then maybe the soul could continue existing in a fourth-dimensional state of innocent bliss, without ever noticing that there’s such a thing as death.

Goro’s death prompts Kogito into an extended reverie that lasts the entire book. Worried for Kogito’s obsession with the tapes, Chikashi adviced Kogito to go on a retreat. So off Kogito go on a 100-day break from his Tagame and went to Berlin as guest professorship. He thinks about his wife, his disabled son Akari (upon checking Wiki, I discovered whose name is suspiciously similar to Oe’s own disabled son, Hikari), he philosophies about artistic expression, he recalled his childhood experience with Goro and one incident which is pivotal to the change in Goro’s psyche which then Goro became the titular changeling.

If we resist the tendency to break – that is, to fall apart – not only will we ourselves remain intact, but we won’t hurt other people, and those who were once broken will become whole again. Goro’s essay titled This Fragile Thing Called Man

It was, in essence, an evaluation of the direction Kogito had been pursuing in his own way of living in the world, but one which Goro did not practice.

Kogito’s wife, Chikashi, remains on the background in most of the stories until towards the end of the book when she takes up the narrative and reveals things that Kogito didn’t know. She summarises all the pertinent points in a neatly-numbered analysis (which pleases the organising freak of me immensely!) and at least provide a certain level of closure to the mysteries that Kogito has been alluding to, most notably Goro’s involvement with the mystery woman in Berlin and the impact of the traumatic weekend during the two friends’ schooldays that Kogito thinks of only as “THAT”.

This central secret, whom Oe is confronted with the choice of making a movie of Goro’s screenplay, is less horrifying than I would have expected. This book is great for my Oe’s read because I went in without any inkling about Oe’s novels, instead expect this to be a ghost story of some sort but turned out that it isn’t. Oe didn’t explicitly tells you the reason for Goro’s suicide, but leave you with the multiple possibilities of what might have gone through Goro’s head in his final days before he took the plunge.

My word of caution would be: Do not approach the novel expecting a plot and structure. In truth, every chapter feels like a random thought that spurts out of my rambling blog post. (No, maybe Oe does it more elegantly than I could). Oe skips freely back and forth between from the past to present remembering Kogito’s childhood, Goro’s upbringing, the Yakuza gangster’s attack, running debate about artistic aspiration and one that I found quite harrowing was the bloody scene of Kogito attempt to butcher a big turtle to make turtle soup, arrghhh!! Such cruelty that made me cringed, how I wish it was Kogito who is being butchered instead!!! 😦

According to literature expert this technique, described in one of many self-reflexive moments as “reiterative divergence”, means that the reader rarely feels securely located in time and space. You feel like you are living in Kogito’s head with endless “solitary marathon of reminiscence”. Rightly put.

So the novel could be disconcerting. Added to the burden is Boehm’s translation. I rarely take a swipe at translators because of the appreciation that they do a huge service to people like me who get to enjoy novels of non-English / Mandarin language. However Boehm’s translation irritates me, for example: This is a bit of your personal argot as well without prior knowledge of your oeuvre. OR You had the other brother repeat the sentence ad nauseam. (huh?)

Lest you get the wrong impression up till this point, The Changeling isn’t hard to read. Oe’s prose is very simple and conversational; added bonus is the publisher Atlantic Books edition of the book, the fonts size are bigger than what the usual hardback offers, although smaller than large print.

Oe uses the incident to further elucidate Goro’s character, of course, but he also uses it to examine the nature of “dirty journalism” like tabloid and gossip columns. He discussed Yakuza’s influence in film production and journalism, about post-war nationalism and sensuality, there is a lot going on in this book. There are a lot of information offered that would only be appreciated by readers who look up Wikipedia for German film, dictionary for French phrases, who is Maurice Sendak and etc. It’s not a book that you can easily recall what it is all about. It is similar like Kazuo Ishiguro’s books. I personally think a book without plot or structure is harder for the readers to remember the story say, 5 years down the road, but these books are meant for a re-reading. So that when you flip open the pages randomly, you could read snippets of writing and reflect without the need to read through the entire book.

Oe’s books are thought to be extremely personal. After looking Oe’s bio up at Wikipedia, indeed a lot of details can be corroborated with evidence from Oe’s own life. It is a book that one may attempt to give up (I did, because I went off to read a lighter After Dark by Murakami before I came back to this novel again), it can be infuriating, but it is worth reading it.

I am reading this for Japanese literature Challenge 4. It’s funny because the J-lit challenge only requires me to read one book and I went on a frenzy to devour a string of Japanese novels, ignoring my more imminent deadlines for my other reading challenges! oh, well! 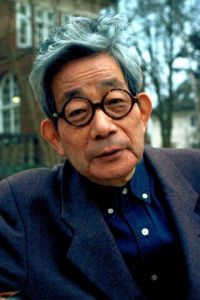 Ōe was awarded the Novel Prize in Literature in 1994 for creating “an imagined world, where life and myth condense to form a disconcerting picture of the human predicament today.”

Ōe was born in Ose (大瀬村, Ōse-mura), a village now in Uchiko, Ehime Prefucture on the island of Shikoku in Japan. He was the third son of seven children. Ōe’s grandmother taught him art and oral performance. His grandmother died in 1944, and later that year, Ōe’s father died in the Pacific War. Ōe’s mother took over his father’s role as educator.

After attending local school, Ōe transferred to a high school in Matsuyama. At the age of 18, he made his first trip to Tokyo and in the following year began studying French Literature at Tokyo University under the direction of Professor Kazuo Watanabe, a specialist on Francois Rabelais He began publishing stories in 1957 while still a student, strongly influenced by contemporary writing in France and the United States.

He married in February 1960. His wife, Yukari, was the sister of film director Juzo Itami. The same year he met Mao Zedong on a trip to China. He also went to Russia and Europe the following year, visiting Sartre in Paris.

Ōe now lives in Tokyo. He has three children; the eldest son, Hikari, has been brain-damaged since his birth in 1963, and his disability has been a recurring motif in Ōe’s writings since then.

In 2004, Ōe lent his name and support to those opposing proposed changes in the post-war Japanese constitution of 1947. His views were seen as controversial by those who wanted Japan to abandon the constitutional impediment to “the threat or use of force as a means of settling international disputes,” which is explicitly renounced in Article 9.

In 2005, two retired Japanese military officers sued Ōe for libel for his 1970 essay, Okinawa Notes, in which he had written that members of the Japanese military had coerced masses of Okinawan civilians into committing suicide during the Allied invasion of the island in 1945. In March 2008, the Osaka District Court dismissed all charges against Ōe. In this ruling, Judge Toshimasa Fukami stated, “The military was deeply involved in the mass suicides”. In a news conference following the trial, Ōe said, ““The judge accurately read my writing.”

A bookaholic that went out of control.... I eat, sleep and breathe books. Well, lately I do other stuff.
View all posts by JoV »
« After Dark by Haruki Murakami
Map of the Invisible World by Tash Aw and Indonesian Independence Day »

10 thoughts on “Changeling by Kenzaburo Oe”