The story opens with the 16-year-old Adam helplessly looking on as his adoptive father Karl is seized by soldiers at their remote island home in the eastern Indonesian archipelago. Karl, a Dutch Indonesian artist who pledged himself to be the citizen of the new country after its independence in 1949, has nurtured Adam, an orphan since he was 5-year old. In the summer of 1964, as the army confronts communists and politicians whip up xenophobia, with sweeping repatriation of every Dutch from the old colonial power, and the bellicose policy of Konfrontasi – a territorial dispute with the newly independent but British-backed Malaysia (see below). The novel is driven by Adam’s frantic search for Karl as civil war looms.

The other drive of Adam is to locate his elder brother, Johan, who was adopted before him, and the separation that haunts both their lives (which haunts me too). Johan, now part of a wealthy Malaysian family in Kuala Lumpur but living a self-destructive life due to torture of his guilty conscience at abandoning his sibling, speeds around the young city in his daddy’s Mercedes, with the sense that “your life is not your own … that your real life is somewhere else”.

Narrated in parallel with Adam’s search for Karl, is the life story of an American anthropologist, Margaret Bates, whom Karl captivated as a young painter in 30s Bali. Now a university teacher in Jakarta, Margaret hunts for her lost love with the aid of the US embassy official Bill Schneider, and an Australian journalist. As the political crisis worsens, and they run into anti-West mobs, communist fanatics on campus, and got entangled with a bomb plot against the president Sukarno, and Bill’s recruitment of Margaret into his diplomatic efforts, to request a favour from President Sukarno. To commemorate the Indonesia Independence day today, I have attempt to publish this book review in conjunction with this occasion.

The Indonesian archipelago has been an important trade region since at least the seventh century, when Srivijaya and then later Majapahit traded with China and India. Local rulers gradually absorbed foreign cultural, religious and political models from the early centuries CE, and Hindu and Buddhist kingdoms flourished. Indonesian history has been influenced by foreign powers drawn to its natural resources. Muslim traders brought Islam, and European powers fought one another to monopolize trade. Following three and a half centuries of Dutch colonialism, Indonesia secured its independence after World War II. The current nation of Indonesia is a unitary presidential republic consisting of thirty three provinces.

The Proclamation of Indonesian Independence (Proklamasi Kemerdekaan Indonesia, or simply Proklamasi) was read at 10.00 a.m. on Friday, August 17, 1945. The declaration marked the start of the diplomatic and armed-resistance of the Indonesian National Revolution, fighting against the forces of the Netherlands until the latter officially acknowledged Indonesia’s independence in 1949. In 2005, the Netherlands declared that they had decided to accept 17 August 1945 as Indonesia’s independence date.

WE THE PEOPLE OF INDONESIA HEREBY DECLARE THE INDEPENDENCE OF INDONESIA. MATTERS WHICH CONCERN THE TRANSFER OF POWER AND OTHER THINGS WILL BE EXECUTED BY CAREFUL MEANS AND IN THE SHORTEST POSSIBLE TIME.

IN THE NAME OF THE PEOPLE OF INDONESIA SOEKARNO—HATTA

Aw’s prose can be powerful and mesmerising in its sense of place (Jakarta’s alleys are “filled with the aroma of incense and cooking and blocked drains”) and psychological acuity. Adam’s past is “like a splinter embedded deep in his skin”. One of the passage mentioned:

“You need to find your past, your real past,” Din tells Adam. “To be ignorant of one’s true history is to live in a void….When we don’t know our past… we cannot claim our future.” This is the map of the invisible world that Adam is trying to draw. But others are marking different, competing maps. His brother Johan, we discover, was adopted by a wealthy couple and taken to live in Kuala Lumpur – the capital of a country the demonstrating crowds in Jakarta do not think should even exist. “Crush, crush, crush Malaysia,” they shout.

The current close relationship between Indonesia and Malaysia white-washed my memory and not until I read this novel again, a section of my history book that mentioned these two countries used to be at animosity with each other resurfaced to my consciousness.

The Indonesia–Malaysia confrontation (also known as Konfrontasi in Indonesian and Malay) was an undeclared war over the future of the island of Borneo, between British-backed Malaysia and Indonesia during 1962–1966. The origins of the conflict lay in Indonesian attempts to destabilise the new federation of Malaysia, which came into being in 1963.

As a part of its withdrawal from its Southeast Asian colonies, Britain moved to combine its colonies in North Borneo with the Federation of Malaya (which had become independent from Britain in 1957), and Singapore (which had become self-governing in 1959). In May 1961, the UK and Malayan governments proposed a larger federation encompassing the states of Malaya, Sabah, Sarawak, Brunei, and Singapore that would be called Malaysia. Initially Indonesia was mildly supportive of the proposed Malaysia, although the PKI (Partai Komunis Indonesia — Indonesian Communist Party) was strongly opposed to it.

President Sukarno argued that Malaysia was a British puppet state, and that the consolidation of Malaysia would increase British control over the region, threatening Indonesia’s independence. In order to solve the dispute, the would-be member states of Malaysia met representatives of Indonesia and the Philippines in Manila for several days, starting on 31 July 1963. At the meeting, the Philippines and Indonesia formally agreed to accept the formation of Malaysia if a majority in the disputed region voted for it in a referendum organized by the United Nations. The Malaysia was formally established on 16 September 1963.

An excerpt of Sukarno speech can be found in this novel from page 153 to 155.

Aw is born from the region therefore Aw successfully painted the linguistic and dialogues that are unique only to people of the region. Aw brought me home to the alley of Kuala Lumpur and the local manner of the speech. Schooled on history books that began only with the discovery of sea routes from Europe, Din, Margaret’s colleague, wanted to write a “secret history” of the Indonesian islands east of Bali, a “lost world where everything remained true and authentic, away from the gaze of foreigners … a kind of invisible world, almost”. It is rather in the traumatised brothers’ enduring bond (that perhaps is trying to say something about the two countries), in their relationship with the sea or with their own fragmented memories that the novel is at its most haunting and memorable.

Aw writes passages that give the best description of the psyche of people in the region:

We all suffer from it (pain) in one way or another. Erasing memories in this semi-conscious way goes on everywhere, on a national scale with culture – everything. We Asians are very good at it. If there’s a drought that kills hundreds of thousands, or an earthquake, or the government fires upon demonstrators – well, we just forget it and move on. It lingers in our psyche, but we never let it come to the surface. It just stays buried deep inside. When I lived in Europe I saw that Westerners remember everything – they commemorate bad things that happened to them. It was the only thing I liked about the West. – Din

Margaret looked at Adam’s face, so much older now than it had been a few days ago, but still that of a boy. It was this ridiculous thing called hope that kept it that way, but she could see it changing , the hope ebbing away slowly. Soon he would be a man, and quickly, inexorably, old. It was what happened when hope slipped away from your clutches. In certain isolated near-Stone Age tribes in Irian, Margaret had seen how the ageing process was far less defined. People did not blossom in adolescence then fade painfully into old age; they were born elderly, mature before their years – child-adults – but then they seemed to remain this way, their faces permanently etched with the quizzical smile of an infant, even as their hair became flecked with grey. It was because they were not programmed to hope, to look forward to some magical potential, and so did not degenerate as the boundaries of their lives shrank with age.

Which I thought were very true and profound.

I feel Aw wanted to drive home that Map of the Invisible World is about how postcolonial culture is shaped, how histories and memories collide to produce a new synthesis. The emerging form of a new government is not free from xenophobia or anti-colonial sentiments. Until today I am still surprised at Indonesia’s aggressive stance towards Malaysia, through the policy of Konfrontasi, but Malaysia and Indonesia, with the same language and so much of their history and customs in common, are like two siblings. Here Aw uses the relationship of the two brothers as parable and how the two countries have since took different routes.

The novel however is an uneven effort. The plot is limp, it doesn’t prevail as a twisted political thriller and diplomatic intrigue nor does it offers the fulfilling read of all come to a full circle ending. I am not particularly drawn to any of the characters, except Adam. I can’t get to grip with Margaret’s world weary coldness and her sudden affection towards Adam and locating Karl. Aw’s real talent is for description, his prose is lyrical. However towards two-thirds of the book his talent became cumbersome. I read with grudge and asked myself “When is this going to end?”. It’s a 342-page book that feels like 550-page. Which is a shame really because it started so well.

The many cover art of the novels are beautiful. 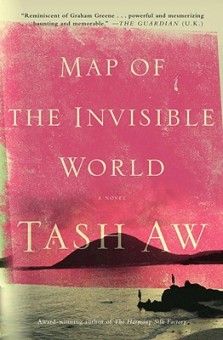 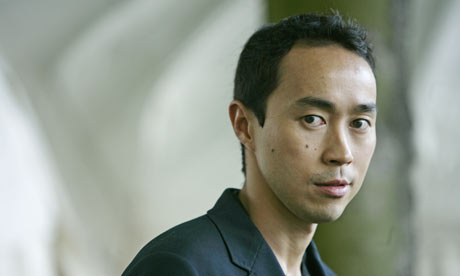 Born in Taipei, Taiwan, to Malaysian parents, he grew up in Kuala Lumpur, Malaysia before moving to England in his teens. He studied law at the University of Cambridge and at the University of Warwick and then moved to London to write. After graduating he worked at a number of jobs, including as a lawyer for four years whilst writing his debut novel, which he completed during the creative writing course at the University of East Anglia.

His first novel, The Harmony Silk Factory, was published in 2005. Longlisted for the 2005 Man Booker Prize and won the 2005 Whitbread Book Awards First Novel Award as well as the 2005 Commonwealth Writers Prize for Best First Novel (Asia Pacific region). It also made it to the long-list of the world’s prestigious 2007 International Impac Dublin Award and the Guardian First Book Prize. It has thus far been translated into twenty languages. Aw cites his literary influences as Joseph Conrad, Vladimir Nabokov, Anthony Burgess, William Faulkner and Gustave Flaubert.

A bookaholic that went out of control.... I eat, sleep and breathe books. Well, lately I do other stuff.
View all posts by JoV »
« Changeling by Kenzaburo Oe
Never Let Me Go – Movie Trailer »