After the Banquet, the real life begins 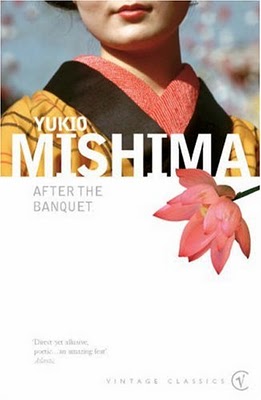 After the Banquet (宴のあと, Utage no Ato) is a novel by Yukio Mishima. It follows Kazu Fukuzawa, an attractive, middle-aged proprietress of an up-scale Japanese restaurant called Setsugoan that caters to politicians, mainly the conservatives. Kazu is a strong-willed single woman who runs her fashionable restaurant with a combination of charm and shrewdness. Kazu arrived at a point in her life when her love affairs are past and when everything seems quite clear to her; she has divided human psychology into firmly defined compartments and is confident of her point of view and her position. Indeed, it is just this prideful confidence and certainty that the action of the novel serves to undermine.

When she meets a semi-retired politician and ex-cabinet minister, Noguchi, Kazu’s life made a drastic change.

The opposites attract they say. Although many of Noguchi’s gestures and comments make her think that he is an old man, Kazu is primarily fascinated by his dignified and stately manner. Furthermore, he seems to represent a world of the intellect, a realm of books and ideas and principles—all of which are alien to her rustic and intuitive nature. She develops an ideal image of the man, seeing him as one are dignified and powerful. After their wedding ceremony Kazu believes that she has realised the goal of a lifetime: She has become the wife of a distinguished man and when she dies her tombstone will find a home be erected next to Noguchi’s respectable family cemetery.

From there the novel explores the conflicts that rise up between these two different people; Kazu – shrewd, streetwise, with great people skills, Noguchi – an introvert, intellectual, a man of few words, principled and rigid.

As the tensions between Kazu’s independent and masculine thinking and Noguchi’s integrity flare up, Kazu is forced to choose between her marriage and her business. Kazu spent less and less time on the business and endeavour to become a proper wife. Kazu. She endures Noguchi’s overbearing and misplaced sense of superiority and his formal aloofness, because she takes pride in belonging to a noble family with a long lineage and dreams of being buried in the family temple; in this way, she believes that she has tricked eternity.

The novel took a drastic turn when Noguchi is asked to run for the governorship of Tokyo as a candidate for the radical party in Japan. Kazu’s restaurant has been a favourite haunt for members of the conservative party; thus she has some ideas about the behind-the-scenes nature of politics. She networks around her political friends and acquaintances. In time, the restless Kazu decides to resurrect her husband’s political career. Making Soichi Yamazaki, a master of campaign strategy, her co-conspirator, Kazu begins her schemes and mobilises her resources to get her husband elected.

Noguchi who holds true to old moral virtues does not tolerate campaign extravagances. Kazu believes that the election is her Heaven-appointed task and run the campaign behind her husband’s back…..

Every passage of the novel was filled with such psychological acuity and an unblinking insight into the nature of political and domestic warfare and a vivid portrait of a marriage in which lofty principles clash fatally with appetite and ambition that I ended up noting at every page. My idea of a great book depends on how many sentences that I am happy to quote and remembered in my own head, this one has got too many of them that I am sure I want to own it.

It is a delightful novel, both a political and social satire. I have learnt much more about the Japanese culture than any other Japanese literature I have read so far. it illustrates the specific roles of men and women in Japanese society.

A woman is subservient to her husband

If he became bored with a subject he would carefully count the segments in a tangerine he had peeled, and silently share the fruit with Kazu, giviner her precisely half the segments. But the size varied, and Kazu’s share was actually less than half of the tangerine – Page 68

Kazu poured the saké for the party, as Noguchi had commanded. It only gradually dawned on her that Noguchi’s disavowal, repeated every five minutes, was bring made for her benefit; she was aghast at her own obtuseness. He undoubtedly felt that to reveal to his wife in the presence of others his political ambitions was no different from letting others see his sexual desire. – Page 115

Mishima also detailed intricacies in Japanese dining; i.e. eating, utensils, foods, flavours, textures, ingredients, inclusive of dinner menus. In one of the chapters, Noguchi invited Kazu to the Omizutori ceremony and the novel introduces us to the procedure of a religious festival, the Omizutori ceremony.

Omizutori (お水取り), or the annual, sacred Water-Drawing festival, is a Japanese Buddhist festival that takes place in the Nigatsu-dō of Tōdai-ji, Nara, Japan. The festival is the final rite in observance of the two week-long Shuni-e ceremony. This ceremony is to cleanse the people of their sins as well as to usher in the spring of the New Year. Once the Omizutori is completed, the cherry blossoms have started blooming and spring has arrived.

The rite occurs on the last night of the Shuni-e ceremony, when monks bearing torches come to the Wakasa Well, underneath the Nigatsu-dō Hall, which according to legend only springs forth water once a year. The ceremony has occurred in the Nigatsu-do of the imperial temple at Nara, of the Todai-ji, since it was first founded. These annual festivals have been dated back to the year of 752

Omizutori is the largest ceremony on the night of the twelfth of March. The monks draw water, which only springs up from the well in front of the temple building on this specific day, and offer it first to the Buddhist deities, Bodhisattva Kannon, and then offer it to the public. It is believed that the water, being blessed, can cure ailments. The Omizutori ceremony is the accepting of water from a well. This well is said to be connected by an underground tunnel to Obama on the Sea of Japan coast. The water is given from the waterway of Obama annually by the priests of the syncretic Jinguji temple in Obama in a ceremony called “the sending of the water.” The water is actually drawn into two pots, one pot containing water from the previous year, and another that contains the water from all previous ceremonies. From the pot of water that holds the water of the current year, a very small amount of the water is poured into the pot which holds the mixture of water from all of the previous ceremonies. The resulting water mixture is preserved each year, and this process has taken place for over 1,200 years.

I relate deeply to this novel, because as a career woman and a wife, my priorities are always misappropriated, my heart is always torn. There are many spirited women that gave up their passions or career for their family, conform to societal norms and live a life of suppressed passion and abandoned hope. The more spirited the woman it is, the harder it is to suppress, the more inner turmoil she experiences.

Noguchi believed that there was no room for divergence in human conduct, whether in politics or love. He was convinced that all human actions were based on the same principles, and that politics, love, and morality must, like the constellations, be governed by fixed laws. Thus any one act of betrayal was exactly equal to the other acts of betrayal, and all were nothing less than betrayals of the fundamental principles as a whole. An adulteress’s political chastity and a chaste woman’s political betrayal represented the same kind of immorality.

It was obvious at any rate that Noguchi thought of this marriage as his final abode, and Kazu, for her part, felt she had found her tomb. But people cannot go on living inside a tomb. – Page 105

Ultimately it is a novel about staying true to yourself.

The story ending is far from perfect, but it is one that I felt redeemed.

Have you read any of Yukio Mishima’s novels? If so, what do you think about it?

Yukio Mishima (三島 由紀夫, Mishima Yukio) was the pen name of Kimitake Hiraoka (平岡 公威, Hiraoka Kimitake, January 14, 1925 – November 25, 1970), a Japanese author, poet and playwright, also remembered for his ritual suicide by seppuku. Nominated three times for the Nobel Prize in Literature, Mishima is considered one of the most important Japanese authors of the 20th century, whose avant-garde work displayed a blending of modern and traditional aesthetics that broke cultural boundaries, with a focus on homosexuality, death, and political change.

Yuko Mishima was born into a samurai family and imbued with the code of complete control over mind and body, and loyalty to the Emperor – the same code that produced the austerity and self-sacrifice of Zen. It is because of his beliefs and upbringing that I felt Mishima brought a lot more elements of “Japanese” than any other authors can.

Mishima fascinates me. He looks like a poster-boy for GQ and he wrote countless short stories and 33 plays, some in which he acted. The Sound of waves and Enjo (The Sailor who fell from the Grace with the sea) are made into movies.

After Mishima conceived the idea of The Sea of Fertility tetralogy in 1964, he frequently said he would die when it was completed. On November 25th, 1970, the day he completed The Decay of the Angel, the last novel of the cycle, Mishima committed seppuku (ritual suicide) at the age of 45.

The book After the Banquet was first published in 1960 under the Japanese title “Utage No Ato”. The New Yorker called it “the biggest and most profound thing Mishima has done so far in an already distinguished career” upon its translation into English by Donald Keene in 1963. The politician Hachiro Arita sued Mishima, claiming its publication violated his privacy. The Tokyo District Court found in favour of Arita on 28 September 1964, Japan’s first judicial recognition Japan of the right to privacy. The case became very famous due to its celebrity litigants and the groundbreaking decision; it was named the After the Banquet case (Utage no Ato Saiban).

A bookaholic that went out of control.... I eat, sleep and breathe books. Well, lately I do other stuff.
View all posts by JoV »
« The Girl with the Dragon Tattoo – A movie review
Midnight’s Children Read-along »

6 thoughts on “After the Banquet, the real life begins”