In the company of wreckers (Jamaica Inn : Daphne Du Maurier) 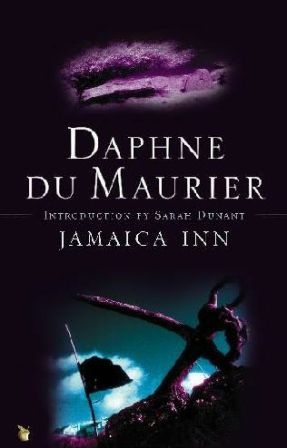 I can’t remember how the idea came about, but when Bina of If You Can Read This asked if we could read Jamaica Inn together starting 18th December, I jumped at the idea. I haven’t regretted since because this book is such a page turner. I thought Du Maurier’s novels are going to be hard work. The impression I had when I read Rebecca last spring was that although I like her style and the ending and the twist of the book, I can’t wait for it to finish. For me Jamaica Inn is a much more entertaining read than Rebecca.

Jamaica Inn tells the story of the 23-year-old Mary Yellan, brought up on a farm in Helford but who is forced to go and live with her Aunt Patience after Mary’s mother dies. Patience is the wife of the keeper of Jamaica Inn, Joss Merlyn. On her arrival at the gloomy and threatening inn, she finds her aunt under the thumb of the vicious Joss, and soon realizes that something unusual is afoot at the inn, which has no guests and is never open to the public. Mary tries to squeeze the truth out of her uncle during one of his benders, but he tells her, “I’m not drunk enough to tell you why I live in this God-forgotten spot, and why I’m the landlord of Jamaica Inn.” (which he did, when he became drunk enough to do just that).

Much against her better judgement, Mary becomes attracted to Joss’s younger brother, Jem, who is not a villain like Joss, nevertheless a horse thief and a liar, a man of lesser substance in my opinion. After Mary realizes that Joss is the leader of a band of wreckers and even overhears Joss ordering the murder of one of their member, she is unsure whether to trust Jem or not. She turns to Francis Davey, the albino vicar of the neighbouring village of Altarnun, who happened to find Mary when she got lost one day on the moor.

I have my heart caught in my throat after plucky Mary took more risks than necessary and found herself in one danger after another. The danger of Mary being raped in the company of such beastly men was a constant worry for me. While I hated the unnamed protagonist of her feeble mind and weak personality, I admire Mary’s courage and wilfulness in Jamaica Inn. Now this is a woman I can relate to, except why does she has to fall in love with a thief?

He stood for everything she feared and hated and despised; but she knew she could love him. Nature cared nothing for prejudice. Men and women were like the animals on the farm at Helford, she supposed; there was a common law of attraction for all living things, some similarity of skin or touch, and they would go to one another. This was no choice made with the mind.

Mary reasoned and followed Jem to Launceston fair the next day.

I have a new sense of respect for Du Maurier in describing cruelty. From the rough brutality to fastidious care of slicing the loaf, a sinister revelation because it was unexpected and not true to the type. In the heart of the action, there is a romance. The witty bantering between Mary and Jem also made me smile. It is a welcoming break from the gloominess of the whole story setting.

Jamaica Inn has a great sense of place, the Cornish tors, moors and bogs I am beginning to see them in different light. It made me want to visit Cornwall and Jamaica Inn (240 miles or 386km from where I live). My colleague at work who is a great fan of Du Maurier told me she visited Jamaica Inn and part of the Inn is now open to the public as museum exhibit. When I do make it to Cornwall one day I will look out for Jamaica Inn surely.

I suppose I have been out of touch with the world of thrillers and mystery, so when the true villain reveal itself, I was surprised. Duh!

Jamaica Inn is said to remind readers of two great classics, Jane Erye and Wuthering Heights.  I haven’t read Wuthering Heights but I can’t foresee any similarity except for the mention of the moors. The cruel and filthy Joss Merlyn is hardly the love obsessed Heathcliff. I am inclined to say enjoy Jamaica Inn as it is. After reading many books that seems like hard work, I am grateful for a respite in Jamaica Inn.

If every Du Maurier is as a page-turner as this one, I can’t wait to read more of her books!

Abundance of other views:

The Jamaica Inn is a free house in Bolventor, near the middle of Bodmin Moor in Cornwall. Built as a coaching house in 1750, it was a staging post for changing horses during stagecoach runs over the moor. It is accessible in present-day by the A30. The hill named Tuber orTwo Barrows, 1,122 feet (342 m), is close-by.

The inn is famous for being the base of smugglers in the past as well as being known as the setting for Daphne du Maurier’s novel of the same name. The young author was inspired to write her novel when, having gone horseriding on the moors, she became lost in thick fog and sought refuge at the inn in 1930. Whilst recovering from her ordeal, the local rector is supposed to have entertained her with ghost stories and tales of smuggling; he would later become the inspiration for the enigmatic character of the Vicar of Altarnun. The novel was made into the film Jamaica Inn in 1939 by Alfred Hitchcock and Jamaica Inn a 1983 television series starring Jane Seymour. The Inn is also rumoured to be haunted. 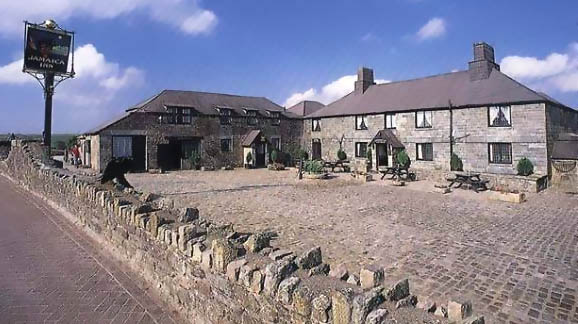 A bookaholic that went out of control.... I eat, sleep and breathe books. Well, lately I do other stuff.
View all posts by JoV »
« My Life in Books 2010
Reading (and Purchase) Analysis 2010 »

11 thoughts on “In the company of wreckers (Jamaica Inn : Daphne Du Maurier)”