Confessions of a Mask by Yukio Mishima

Compared to the many books I have read, I count this one as one of my bold ones.

Confessions of a Mask (仮面の告白 Kamen no Kokuhaku) is Yukio Mishima’s first novel. Reading my past posts, you may have sussed out my fascination for Mishima. This book published in 1948, catapulted him to national fame when he was only in his early twenties. Herald to be semi-autobiographical Confessions of a Mask is about  Kochan’s life from adolescence to marriagable age. Born in 1925, Koshan was a frail child, and lived under the strict supervision of his grandmother. During the WWII, he was a student and a factory worker.

Koshan soon realised he is attracted to boys at a very early age. He was aware when he saw the picture of Guido Reni’s “St. Sebastian” which hangs in the collection of the Palazzo Rosso at Genoa. It is as though he knew what he feels is wrong so he makes up for his guilty conscience by acting masculine as normal boys would, i.e. he plays war games, talks about girls and even going as far as convincing himself that he is in love with his friend’s sister, Sonoko.

Koshan’s bares his soul of his secret desire to Omi, a classmate. Omi fails to move on with his studies and as a result he is more physically developed and attractive than the rest of the boys. Omi is arrogantly superior to the students around him but not unkind to Kochan and it seems to imply Omi is aware of the passion Kochan feels for him. Omi is expelled from school during the summer break, and Kochan never sees him again.

The titular ‘mask’ comes from how Kochan put on his facade to hide his true self which goes against societal convention, thus the voice of an unreliable narrator came out loud and clear in this journal. It is not only homosexuality that Koshan harbours as an obsession but he is drawn to death and violence especially the thought of beauty violated by pain and torture.

From this book, I found clues about the writer’s inclination that will led to suicide in his later life.

The character Koshan is obsessed with body building, his homosexuality, his militarism, a deep assumption that he will die young etc. are Mishima’s alter ego. Koshan expressed his fascination with the sea, heightened with his inability to swim and that led me to remember the book title that Mishima wrote of “The Sailor who falls from grace from the sea”.

The funny thing about reading Confessions of a Mask is that although it says it is a work of fiction it doesn’t sink in with me. I think it is because of the cover and how alike the voice and experience of the protagonist to Yukio Mishima that I read the entire book like I’m reading Mishima’s early life story and believe that it was his autobiography.

The book is very engaging because as I read I can hear an inner voice of a very tormented and confusing soul and I knew the voice was Mishima’s. I wasn’t too keen on Kochan’s fascination about same sex anatomy or his first love but I was intrigued with his conflicting feelings that he felt for Sonoko. His relationship with Sonoko was a strange one, one that you will never hear from any other conventional perspective about boy-girl relationship.

“I had decided I could love a girl without feeling any desire whatsever. Without being aware of it myself, I was undertaking to be – please forgive my natural inclination toward hyperbole – Copernicus in the theory of love. In doing so I had obviously arrived unwittingly at nothing more than a belief in the platonic concept of love.” – page 131

Koshan measures his every encounter with Sonoko against conventional hot blooded boys’ reactions and he came out falling short, his heart did not throb as he expect it to be, he felt nothing when he kiss her. As a reader, just when I thought Koshan would love Sonoko, he proves me wrong. No character has lived in such self denial as Koshan …..

My “act” has ended by becoming an integral part of my nature, I told myself. it’s no longer an act. My knowledge that I am masquerading as a normal person has even corroded whatever normality I originally possessed, ending by making me tell myself over and over again that it too was nothing but a pretense at normality. To say it another way, I’m becoming the sort of person who can’t believe in anything except the counterfeit. But if this is true, then my feeling of wanting to regard Sonoko’s attraction for me as sheer counterfeit might be nothing but a mask to hide my true desire of believing myself genuinely in love with her. So maybe I am becoming the sort of person who is incapable of acting contrary to his true nature, and maybe I do really love her…. – page 153

Absence has emboldened me. Distance had given me claim to “normality”. I had so to speak, accepted “normality” as a temporary employee in the corporation of my body. A person who is separated from one by time and space takes on an abstract quality. Perhaps this was the reason why the blind devotion I felt for Sonoko and my ever -present unnatural desires of the flesh had now been fused within me into a single homogenous mass and had pinned me immobile to each succeeding instant of time as a human being without any self-contradiction. – page 182

In me there was a cleavage, pure and simple, between spirit and flesh. T0 me Sonoko appeared the incarnation of my love of normality itself, my love of things of the spirit, my love of everlasting things. But such a simple explanation does not dispose of the problem. The emotions have no liking for fixed order. Instead, like tiny particles in the ether, they fly about freely, float haphazardly, and prefer to be forever wavering…. – page 241

As always Mishima’s novel is beautifully written, considering this is his first published work it is just as accomplished as his last. I finished the book in one sitting and once again he has managed to write a book which are both evocative of growing up pain and utterly heartbreaking. 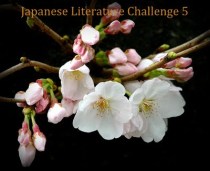 I am reading this for Japanese Literature Challenge 5.

Have you review the book? Let me know and I’ll add in the link.

A bookaholic that went out of control.... I eat, sleep and breathe books. Well, lately I do other stuff.
View all posts by JoV »
« The Clothes On Their Backs by Linda Grant
Underground: The Tokyo Gas Attack and the Japanese Psyche »

14 thoughts on “Confessions of a Mask by Yukio Mishima”