The Terrible Privacy of Maxwell Sim by Jonathan Coe 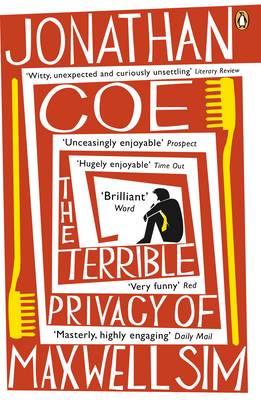 Maxwell Sim is the kind of person who, in our darkest nights of the soul, we all dread becoming: unloved, unsuccessful, doesn’t like himself very much. He is an after-sales customer liaison officer in a London department store, he has been taking leave off work because of depression for six months; his wife, Caroline, and Lucy, left him for the north. To assuage her guilt, Caroline supplied Maxwell with an air ticket to Sydney to see his father, whom he has uncommunicative, guarded relationship with.

The night before he left, an image of a woman and her daughter in a restaurant, on every last Saturday of the month, have dinner and play cards together. Both mother and daughter were engaged and entirely absorbed in each other, as compared to other diners who checked her mobile phones for text messages and another at his watch. The mother and daughter loving intimacy is an agonising reminder of what is absent from Maxwell’s own life. The incident reawakened his need for human contact and Maxwell begins to open up to strangers he met on the way home, with some hilarious and strange encounters. On the plane home he meets a young woman called Poppy, who holds an usual job of tape recording every airport announcement in the world. Poppy also shows Max a letter describing the voyage of Donald Crowhurst, who took part in a round the world sailing race in the 1970s but allowed his personal inner conflicts to cover up his failure to complete his course around the world by falsifying logs (in an era when there was no satellite tracker) and ultimately coming to a disastrous end.  This story resonates with Maxwell, who sees the story symbolic to his journey to the north when he was assigned by his toothbrush company, who sells state-of-art wooden toothbrushes, to prove their marketing slogan literally by “reaching the furthest” on four corners of the United Kingdom and silly Maxwell had the longest journey to reach the tip of Scotland in the North, Shetland, which is the longest journey compared to his three other colleagues. 🙂

Maxwell took on a Toyota Prius, equipped with a sexy, alluring voice of Emma, a female-voiced Satnav, and heads up north, and visiting various people from his past i.e. old neighbours, his wife and daughter, and an old childhood flame, Alice; and soon uncovers horrible truths about his friends and family that Max must decide if he can live with the ugly truth or not…..

I made it sounded factual actually a lot of these scenes are played out brilliantly and humorously; and I can’t help but feel sorry for Max.

I like this analysis about Donald Crowhurst that the guardian.co.uk has written in conjunction with the publication of this book:

Until, that is, the unquiet ghost of Donald Crowhurst comes to hover over the narrative. Crowhurst was the amateur sailor who set off from Teignmouth in 1968 to sail around the world, non-stop and single-handed, in order to win a prize and transform his fortunes. Ill-equipped and unsuited for the race, also being contested by far more able seamen, he was soon adrift; but he knew that a limping return would result in financial ruin and ignominy. In a double-bind, unable either to continue or turn back, he decided to fake his journey, taking advantage of the fact that, in a pre-satellite world, no one really knew where he was. Coe nimbly deploys the real tragedy of Crowhurst’s story – that he wasn’t even able to succeed at fakery, descending into madness and eventual suicide – as a metaphor for Max’s life. What happens, he asks, when, having suppressed every ounce of natural feeling and desire in order to create a simulacrum of an ordered and well-adjusted life, you can’t keep that up either?

I generally don’t like to read books about losers. If you read One Day by David Nicholls, you will know Dexter is the sort of loser I hate to read about, and many of Nick Hornby’s creation of loser characters in his books. The Terrible Privacy of Maxwell Sim though is different. It’s iconic of the sad state of the world we live in. It speaks about the redefinition of “friendship” with many names on Facebook friends list and yet no one notices your absence. You came back to mailbox full of vulgar spams and yet no emails from your friends, the modern motorways that prevents you from getting acquainted to the local communities, the lookalike high streets and restaurants and hotels which means you never have to consume or experience anything unfamiliar or disturbing, a surprise to find that your spouse have written a soul bearing, heart warming to an online friend than talking to you about it, when your teenager became a stranger to you.

Some of my favourite passages:

It gave me a sick feeling in my stomach to be doing this, I must admit. I felt as though I was rifling through Caroline’s underwear drawer or laundry basket. Even so, there was a kind of ugly fascination to it, which kept drawing me back. It intrigued me that she could feel so much for an imaginary person (Liz) and so little for a real one (me). – page 90

Mankind has, as you may have noticed, become very inventive about devising new ways for people to avoid talking to each other, and I’d been taking full advantage of the most recent ones. I would always send a text message rather than speak to someone on the phone. Rather than meeting with any of my friends, I would post cheerful, ironically worded status updates on Facebook, to show them all what a busy life I was leading. – page 19

My own theory – or one of them – was that once you started to hit middle age, you became so jaded and unsurprised by life that you had to have a child in order to provide yourself with a new set of eyes through which to view things, to make them seen new and exciting again. – page 203

Often, as I’d come to realise over the last few weeks, the internet is something that puts up barriers between people as much as it connects them. But there are also times when it can be an uncomplicated blessing. – page 305

Much have been said in blog reviews about the strange ending of the book. The ending reminds me of the Jim Carey’s movie “The Truman Show” the main character found out that his life is but a fiction. In “The Truman Show” at least I was told that his life was going to be a fiction but I wasn’t told Maxwell Sim’s life was such so I didn’t like the surprise at the end. In fact if the book didn’t ended that way, I would have rated it a 5-star.

I read and I tried to understand what is the root of Max’s emotional problems? It seems he already has a problem at the beginning, and then his psychological problems are compounded by the dreadful truth he found out about his closest ones. Perhaps he lacks empathy, perhaps it is a case of finding a companion yet has the urge to run away from it. Is it his upbringing? external social forces? Or is it Max’s inability to establish meaningful human contact, an individual temperament? In this hilarious, multi-themed, onion-peeling of uncovering Max’s life, you make up your own mind. Solitariness. The ironic of present time: at a time when it was so easy to get connected, more than ever we are isolated, at least I have felt more isolated.

This is my first Jonathan Coe book and I like it very much. I think perhaps Satire is my thing, with a tinge of wry humour. If he writes like that all the time, I want to read all his books. The book is full of surprises and there are many stories within a story.

….and my conclusion is..

Not a minute of boredom, I was thoroughly inspired, disgusted and entertained. Many more laugh-out-loud moments than most books did for me.

Did you see the toothbrush in the book cover?

A Common Reader: Five and half stars if that’s possible. Its not often I can say that a book has been a wholly satisfying read, but I found it very difficult to put this book down. It was another book which I raced through with no sense of boredom or tedium, and it passed my classic test of literary engagement – do I miss the characters when I’ve finished the book?  Yes, I regretted Maxwell going forever out of my life when I turned the final page and would have liked to have found out what happened next.

Judith@ Leeswammes: It’s a fast read and one that you can put down, but when you do, in the back of your mind you remember that there is something nice waiting for you!

Jonathan Coe (born 19 August 1961) is an English novelist and writer. His work has an underlying preoccupation with political issues, although this serious engagement is often expressed comically in the form of satire. For example, What a Carve Up! reworks the plot of an old 1960s spoof horror film of the same name. It is set within the “carve up” of the UK’s resources which some believed was carried out byMargaret Thatcher’s right wing Conservative governments of the 1980s.

Coe was born in Bromsgrove, Worcestershire. He studied at King Edward’s School, Birmingham and Trinity College, Cambridge. He taught at the University of Warwick, where he completed an MA and PhD in English Literature.

Through words, she offers us her shaming revelations.

– James Wood, writing about Toni Morrison in the Guardian, 18 April 1992

A bookaholic that went out of control.... I eat, sleep and breathe books. Well, lately I do other stuff.
View all posts by JoV »
« What I talk about when I talk about commenting on blogs
September: A month I can’t quite remember »