Girl in Translation by Jean Kwok 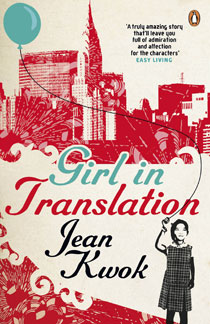 I had about 3 books going in one go and none of it was going as fast as it should. One nonfiction book about Google employee’s experience working for Google in its early days, another non-fiction about the kingdom of Saudi Arabia, and another non-fiction book on Micro-credit ‘Banker to the Poor’. So I decided to pick up ‘Girl in Translation’ hoping that it was going to be an easy and entertaining read. It is.

Kimberly Chang arrives in Brooklyn as an eleven-year old, thanks to her Aunt Paula, who proceeds to keep Kimberly and Ma in her debt. Mother and daughter live in a condemned apartment with no heating and rubbish bags over the shattered windows. After school, Kimberly must help her mother in Aunt Paula’s sweatshop, where she helps her mother sew and packed clothing in which she is not paid and her mother is paid a pittance. Needless to say it took them years to pay off their “debts” to Kim’s aunty.

Kwok ushers us right into young Kim’s head, with the Chinese turns of phrase (“The job is picking up a dead chicken”) mixed in with phonetics of unfamiliar English phrases into something familiar in Kim’s head — “This is a pop quick”– draws us into her state of confusion, with subtle humour — “their budget may already be ex-sausaged”. Kim doesn’t speak a word of English and the school environment wasn’t particularly friendly to her, with teachers who picked on her English to the ones who suspects she is too clever because she cheats, and to fellow classmates who laugh at her clothes. However, she was most fortunate to find a good friend in Annette who invited her for a sleepover once. She also had a crush on Mark who grew up in the sweat shop with her but will she give up everything and all she fought for be with Mark? Or will she chart her own path? Only the end will tell….

Reading the book was a breeze. It was easy to read, the book was well written, the language was fluid. The novel is unflinching in the harsh details of this life, from the roach infested apartment to the man who sears his hand in a steam press. I was drawn into the world of Kimberly of her sufferance in the bitter cold in her home without heating during winter, with only the open stove to keep warm. Kim lives a double-life of a daughter of a poor immigrant and a student of a eliteNew Yorkprivate prep school.  Not only does the character work in the factory, she and her mother scour the dumpster for discarded stuffed-animal fabric that they turn into clothing and blankets to keep warm in the winter.

“Even now, my predominant memory of that phase of my life is of the cold. Cold like the way your skin feels after you’ve been slapped, such painful tingling that you can hardly tell if it’s hot or cold. It simply registers as suffering. Cold that crept down your throat, under your toes and between your fingers, wrapped itself around your lungs and your heart.” – page 44

“We were paid 1.5 cents per skirt. For years, I calculated whether or not something was expensive by how many skirts it cost. In those days, the subway was 100 skirts just to get to the factory and back, a package of gum cost 7 skirts, a hot dog was 50 skirts, a new toy could range from 300 to 2000 skirts.” – page 58

The skirt metric was heartbreaking and illustrates in magnitude the hardship that Kim and her mother endures.

As the story progresses, Kimberly proves her toughness at both the factory and the academy, the details of each she hides from her best friend at school and from her mother. She becomes expert at code-switching: slipping plastic bags over cheap factory skirts, as well as navigating the academic and social landmines of being a scholarship kid.

I didn’t mind. I enjoyed pretending to have more of a normal life when I talked to Annette. It allowed me the luxury of imagining I was richer and better off than I actually was. It was also too hard to tell someone how we lived when there was so little chance of change. – page 199

I remembered when I was 12, I had a close and more affluent friend whose only house I have visited. Her house was full of books and she had so many things that I didn’t have. As a young girl, that feeling of comparing my life against hers etched on my mind. I remember feeling envious but never inadequate. It is always in a little girl’s mind to imagine how it is like to live a better life than her current one.

Author and her mother

The hardship and determination of Kim made a great story for a novel but it is not until I read the biography of the author that I realised that the novel in part is based on the true story of the author. I genuinely felt awe-aspired by the hardship and determination of the author which is transcended to the character of Kimberley Chang. There wasn’t an onslaught of miseries but the story was told as events unfold itself. I am moved by the heartbreaking account of the Kim living in two different conflicting worlds which I personally could relate to.  Just a few minor gripes, at times I feel the book is a little more for YA rightly so perhaps it was a coming of age story about a girl and the sudden hop over to the next 12 years was a little abrupt and the ending implies a continuation of a sequel.

At the end, I thought I was thoroughly entertained with the novel and finish it within one sitting and there are many parts of the story I really like. So it deserves a 4.5 from me. This book makes a good afternoon read, or if you are like me stuck with 4 heavy-going books, this book will break your reading slump like it did for mine. 🙂

The author’s introduction to the book: 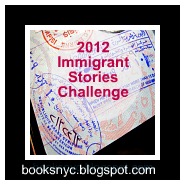 I’m reading this as my first book for Immigrant Stories Challenge 2012.

Soul Muser@lifewordsmith: And that is the pity, really because the author’s real life is anything but contrived. The book is based on Kwok’s own experience and any writer who can draw from the milk of human despair and rise above it deserves to be appreciated. Jean Kwok spent 10 years working on this novel, and wrote this book for her Mom who worked in a sweatshop, just like Kim’s. Yet somehow, this novel failed to speak to me. But don’t let that discourage you – perhaps you might find more interest and empathy in it than I did. I am perhaps too harsh a reviewer, sometimes! 🙂

Swapna@Skrishnas books: I can’t say enough great things about Girl in Translation.  It’s such a captivating book, readers will find themselves emotionally invested in Kimberly’s future.  Her successes will make them feel triumphant, while her mistakes will have readers trying to reach into the pages, wanting to give her some comfort.  Kwok’s prose is expertly written; I have trouble believing this is a debut novel because it’s so well-crafted.  I enjoyed this novel from beginning to end and look forward to seeing what Kwok does next.

Helens bookblog: While this is a tough story, it is also one of hope because Kimberly’s smarts are recognized in her first year in the US. The ending is a little bit obvious, but I felt okay about that because the story had led up to it well. 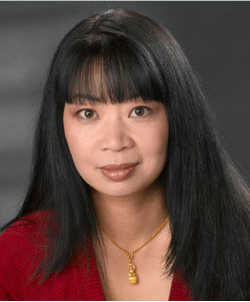 Jean Kwok is a contemporary Chinese American writer and the author of the national bestseller Girl in Translation. Jean Kwok was born in Hong Kong and immigrated to Brooklyn, New York when she was five years old. While living in a roach-infested apartment without central heating, she worked in a Chinatown clothing factory for much of her childhood. She was accepted to Hunter College High School, a public secondary school for intellectually gifted students. Upon graduation, she won early admission to Harvard University, where she worked as many as four jobs at a time, and received a BA in English with honors, before going on to earn her MFA in fiction at Columbia University. She then moved to The Netherlands and worked for Leiden University, teaching English and as a Dutch-English translator. She speaks English, Chinese, Dutch and studied Latin. She lives in The Netherlands with her husband and two sons, and now writes full-time.

A bookaholic that went out of control.... I eat, sleep and breathe books. Well, lately I do other stuff.
View all posts by JoV »
« World Book Night 2012 and The Time Traveler’s Wife
Banker to the Poor by Muhammad Yunus »

17 thoughts on “Girl in Translation by Jean Kwok”