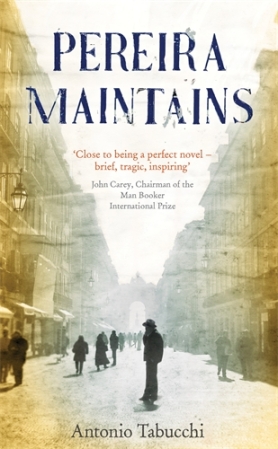 In the sweltering summer of 1938 in Portugal, a country under the fascist shadow of Spain, a mysterious young man arrives at the doorstep of Spain. His name is Monteiro Rossi. Pereira sees Rossi as the son Pereira never had, but also, in the way of late 19th-century literature, his other self, his political conscience personified. Pereira decided to let him write for the cultural page of the newspaper Lisbon, mainly obituaries and death of famous writers. One thing led to another, and Pereira was suck into Monteiro’s cause, at the time when civil war is igniting at neighbouring Spain, the Portugis are compelled to choose sides. So begins an unlikely alliance that will result in a devastating act of rebellion.

It is a slender political novel and in that tradition Mohsin Hamid who wrote The Reluctant Fundamnetalist offers to write an introduction to this book. What intrigue me so much that I picked this book up are the following rave reviews by some of these great writers:

So how could I give this book a miss, right?

The Italian original of Antonio Tabucchi’s novel, Sostiene Pereira (1994), has been widely translated and adapted to film, garnering major European awards. Its Portuguese protagonist – an overweight widower who edits the culture pages of a second-rate evening paper in 1938 Lisbon, under the dictatorship of Salazar – is therefore already beloved on the continent. Pereira begins by believing that self-censorship to avoid state censorship is common sense, that he need be “nobody’s comrade” and that he can convey coded messages of dissent by publishing 19th-century French stories about repentance and resistance.

At the core of the argument in this novel is whether art should be kept separate from politics. What I gather from reading the book is that it shouldn’t and going by contemporary standards art is a free expression of opinions and therefore should not be stifled.

Several other characters are similar stand-ins for Pereira’s conscience: a savvy old priest, a Jewish lady on a train and his doctor, who talks about multiple selves. This is to me the most interesting conversations that Pereira ever had in the book, a lot of which I have marked and took note of them.

Rossi brings Pereira unprintable leftwing articles, slating the Italian futurist Filippo Marinetti or eulogising the poet Vladimir Mayakovsky, and Pereira began to support Rossi and his revolutionary friends. Gradually, he understands that the times demand he be “for” one side and the novel ends with his commitment to commit a final act of rebellion.

Besides the literary references to the European great writers, what draw me the most was the discussion of the matter of the soul:

Theodore Rilbot and Pierre Janet hold a theory of the confederation of souls.[…] well it means, said Dr Cardoso, to believe in a ‘self’ as a distinct entity, quite distinct from the infinite variety of all the other ‘selves’ that we have within us, is a fallacy, .. […] because within us we each have numerous souls, don’t you think, a confederation which agrees to put itself under the government of one ruling ego. …[…] what we think of as ourselves, our inward being, is only an effect, not a cause, and what’s more it is subject to the control of a ruling ego which has imposed its will on the confederation of our souls, so in the case of another ego arising, one stronger and more powerful, this ego overthrows the first ruling ego, takes it place and acquire the chieftainship of the cohort of souls, or rather the confederation and remains in power until it is in turn overthrown by yet another ruling ego, either by frontal attach or by slow nibbling away. – page 113

The writing style is most unusual – it uses a third-person testimonial, withPereira”maintaining” (in another translation “declaring”) its narrative throughout. The phrase is used for both the significant and the mundane. The first chapter opens with “Pereira maintains he met him one summer’s day.” In contrast, the second chapter begins, “In the afternoon the weather changed,Pereira maintains.” This suggests a statement made under pressure from opponents, yet what Pereira maintains can be the wiping of his brow, or simply, “In the afternoon the weather changed, Pereira maintains”. This absurdity both endears and unsettles.

Confusingly, I was looking through the 1000 must-read books before you die list and I remembered a book title that says Pereira Declares. I was supposing that Tabucchi has written a sequel to Pereira Maintains, so it pays to google up and found out that: Confusingly, when the book was first published in the U.S. in 1996 it carried the title Pereira Declares: A Testimony and it used “declares” instead of “maintains.” Both versions however use a translation by Patrick Creagh.

Pereira Maintains is less than 195 pages. It is very readable and if you are one that likes to read deep into every line and spot the significance political nuances in its undertone, you will love the book. I like it just enough on the mention of the multiple selves and another tick off from 1000 must-read books before you die list.

Other views: The asylum 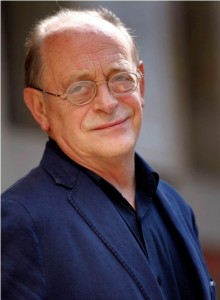 Antonio Tabucchi (September 24, 1943 – March 25, 2012) is one of Italy’s most acclaimed contemporary writers. He was an Italian writer and academic who taught Portuguese language and literature at the University of Siena, Italy. Born in Pisain 1943, Tabucchi is the author of 20 novels and short story collection, 9 of which have been translated into English, together with numerous essays and plays. Twice shortlisted for the Man Booker International Prize, he has been awarded many prestigious prizes, including the Prix Medicies etranger for Indian Nocturne and the Premio Campiello, the Premio Viareggio and the Aristeion Prize for Pereira Maintains.

Since it was first published in Italyin 1994, Pereira Maintains has been seen as a commentary on Italy under Silvio Berlusconi, first named prime minister that year. In fact, Tabucchi himself has recognized that the book, which won three prestigious Italian literary awards, is seen by Berlusconi opponents as “a symbol of resistance from within.” This is another area in which the book succeeds. Here is a book set in 1930s Portugal when fascism was predominant in Europe and the Spanish Civil War was raging yet is viewed as speaking to issues decades later. In fact, as allegory, Pereira Maintains will undoubtedly remain relevant, which perhaps suggests why it is reappearing in hardcover.

A bookaholic that went out of control.... I eat, sleep and breathe books. Well, lately I do other stuff.
View all posts by JoV »
« Chamonix-Geneva-Berlin
Things Fall Apart by Chinua Achebe »