The Particular Sadness of Lemon Cake by Aimee Bender 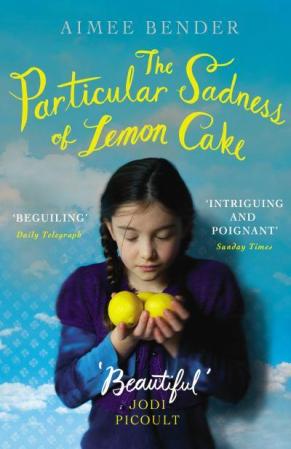 I was wondering what happen to my Phantom of the Opera book review? There is no comment received. Not even one. I thought this is strange. I love this book! Is there anyone out there who think the same??! 🙂

It is funny that I read a lot more when I was ill than I was well. Remember I told you I was down with chicken pox last weekend? Well while the rest of the world was doing Dewey 24-hour readathon, I was doing sort of mine, finishing 2.5 books in a weekend. This is one of them.

On the eve of her 9th birthday, Rose Edelstein bites into her mother’s homemade lemon chocolate cake and discovers she has a magical gift: she can taste her mother’s emotions in the slice.

It tasted so bad that she avoids eating her mother’s cooking, choosing instead to have factory processed food, so that she wouldn’t taste her mother’s despair and desperation.

Rose’s gift means she has to confront the truth behind her family’s emotions – her mother’s sadness, her father’s detachment and her brother’s isolation from the world. But as Rose grows up, she learns that there are some secrets even her taste buds cannot discern.

Why I read it:

The blurb did it for me. Biting into a lemon chocolate cake and tasted mother’s emotion. What an interesting idea! that, on top of the fact that this book has been staring in my face in every  book store, in the train station and in the library.

I thought it was a lovely read, at the first part of the book. Besides dealing with her special gift, Rose is facing her own growing pain. She feels happy to walk alongside her brother Joseph and his friend George, whom Rose developed a crush on. Mom appears sad in parts of Rose’s growing up years but when mom became a little happy she acted a little strange as well. Dad is being dad. Distant and detached. Joseph is strange as well, he disappears without warning and reappears without warning too, like an apparition.

Every member of the family seems to go through some sort of inner turmoil. Mom is unhappy, Joseph is disappointed and despondent because he didn’t get admitted to ivy league universities. It was the turning point that Joseph’s behaviour became more and more strange.

The second part of the book is darker. It sort of “grow up” as Aimee is in her late teens and her brother seems to fall deeper and deeper into some form of depression or emotional trouble. We were never told why. Her brother seems to possess a different kind of gift but it was never explain explicitly what the gift was. I thought I was the only one, I thought I missed something, other reviews have disclosed the same sort of bewilderment. Something happen to Joseph, Joseph turns into a chair! What does that mean? This is so weird. (sorry I may have just spoil it for you but I can’t for the world figure out what happen to Joseph). Dad also has some kind of adverse reaction to visiting hospitals. Perhaps some kind of gift that he is able to sense if he is in the hospital but we were never told what it was.

But the day was darkening outside, and as I finished that first bite, as that first impression faded, I felt a subtle shift inside, an unexpected reaction……None of it was a bad taste, so much, but there was a kind of lack of wholeness to the flavours that made it taste hollow, like the lemon and chocolate were just surrounding a hollowness. My mother’s able hands had made the cake, and her mind had known how to balance the ingredients, but she was not there, in it. – page 11

What is good about a Dorito, I said, in full voice, is that I’m not supposed to pay attention to it. As soon as I do, it tastes like every other ordinary chip. But if I stop paying attention, it becomes the most delicious thing in the world. – page 143

Not true I would say. I taste all of my Dorito slowly and savour every bite. It taste better when I pay attention to it!

Getting the final word in:

The book was an easy read. I like reading about the taste of food and family troubles. Besides that, I felt there were nothing substantial to the book. Like Aimee’s mother’s cake, it tasted “hollow”. I didn’t like the book that much. Not sure what the rave was all about, as readers of women magazines gave the book a raving review.

Ti@book chatter: Good or bad. I enjoy reading books like this because they are weighty, without being dense and give you plenty to think about. Overall, a good read.

Limebird uk: This book is definitely for you if you enjoy a bit of magical realism and also the strong emotional language used. It could also be for you if you enjoy the rich descriptions of food in books, but if you’re a foodie you might not enjoy the fact that Rose resents food for the feelings she gets from them. I also quite liked Rose as a character and felt her quite relatable and won’t be forgetting her voice soon.

Aimee Bender (born June 28, 1969) is an American novelist and short story writer, known for her surreal plots and characters.

She has named Oscar Wilde, Hans Christian Andersen, the Brothers Grimm and Anne Sexton as influences on her writing. A native of Los Angeles, Bender is a close friend of fellow UCI alumna Alice Sebold.

Her first book was The Girl in the Flammable Skirt, a collection of short stories, published in 1998. The book was chosen as a New York Times Notable Book of 1998 and spent seven weeks on the Los Angeles Times bestseller list. Her novel An Invisible Sign of My Own was published in 2000, and was named as a Los Angeles Times Pick of the Year.

A bookaholic that went out of control.... I eat, sleep and breathe books. Well, lately I do other stuff.
View all posts by JoV »
« Man Booker Prize 2012 winner announced
Under the Hawthorn Tree by Ai Mi »