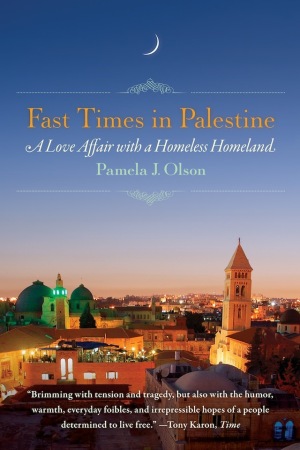 “So much political capital has been made out of the Barcelona fighting that it is important to try and get a balanced view of it… Nearly all the newspaper accounts published at the time were manufactured by journalists at a distance, and were not only inaccurate in the facts but intentionally misleading. As usual, only one side of the question has been allowed to get to the wider public. Like everyone who was in Barcelona at the time, I saw only what was happening in my immediate neighborhood, but I saw and heard quite enough to be able to contradict many of the lies that have been circulated… It is… necessary to try and establish the truth, so far as it is possible. This squalid brawl in a distant city is more important than might appear at first.”  ~ George Orwell, Homage to Catalonia

This is probably the third book that I read which is about Jerusalem / Palestine / Israel.

It was driven by the above Orwell’s message that Olson is compelled to inform her readers, of what is being misrepresented in the media and to share her 2-year experience in Palestine to everyone. The Israel-Palestine conflict is a complicated one. I am not eloquent enough to talk about the Oslo Accords or the political situation in this region but I must say reading the two non-fiction books Jerusalem by Simon Sebag Montefiore and this one gave me a clearer picture of the past and present history of the land. It is nice for my family and I to be able to visit the Palestine and Israel last February 2013 and talked to the locals; and come back and read this book to validate the truth of what we thought was a gossip. I will come back to this later.

I requested this from Netgalley and my initial impression was this is a travelogue of a young lady named Pamela who was bored out of school, so decided she wants to visit the Holy land.

The book started with a sanguine mood as Pam travels through the Holy land. She couldn’t tell the difference between West Bank or Israel, she was questioned of her motive to be in Nazareth. Pam pictured Middle East as a vast desert full of cave-dwelling, Kalashnikov-wielding, mysogynistic bearded maniacs. How wrong she would be as she spent the next two years in Palestine.

Contrary to what she believes, the people of the land have hosted and treated her as a honourable guest, albeit in most turbulent time. Pam spoken to Arabs who live in Israel, in West Bank and Gaza and also Jewish friends in Israel. Pam offers me a glimpse into lives of people who lived in lands that are divided by the Wall, places that I did not drag my two little boys to when we were there, places such as Jayyous, Nablus and Ramallah. Pam experienced first hand the difficulties of people trying to maneuvre around the walls as life is reduced to crossing the checkpoints in a long queue and watching land of forefathers being demarcated for settlements. 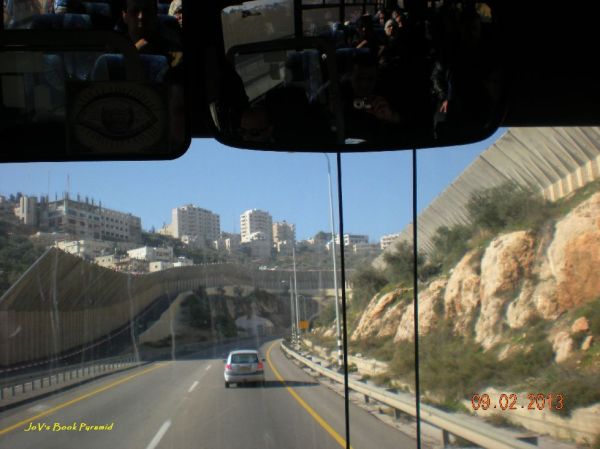 The Wall contradicts Geneva 4th Convention, which forbids an occupier from transferring its civilians into occupied territory. When the wall is finished, it will stretch more than 400 miles, or twice the length of the Green Line. It will be four times as long and twice as high as Berlin Wall. The United states has used its Security council veto to block at least 42 UN resolutions that attempted to curb Israel’s violations of international law. It would take Olson a few more years and a stint in Washington to understand the dynamics behind America’s “special relationship” with Israel.

Right at the middle of the book Olson reported her daily count of local conflicts and clashes. Number of casualties and incidents were reported down to the dot. For more than 2 chapters, more and more harrowing and horrifying atrocities were reported and it doesn’t look as if the bad news were going to let up, which make for quite a distressing reading experience for me.

The thing that worms its way into my heart was the mention of warm human relations and daily anecdotes of the holy land. Similar to Olson, I thought I was the least attractive one there in Jerusalem without my headscarf and wind-blown frizzy hair because:

All the other women wore stylish, diaphanous hearscarves and subtle, lovely make-up, and if the aim of that getup was to make them less attractive, it had failed miserably.

I too tasted the Kunafa: a warm, cheesy dessert covered in spiced shredded wheat, smothered in vanilla-citrus syrup, and topped with crushed pistachios. It was nothing like I have tasted before.

I saw the view that Olson mentioned atop the Roman citadel in Amman, as the sprawling view of Amman from all sides are visible. I visualise every thing that is being said about Petra, Bethehelm and the Dome of the Rock, Tel Aviv and Jaffa.

Before I visited the region, the impression I got was the Arabs and the Jews were in this tug of war without any compromise from both sides. So imagine when the taxi driver told my other half and myself that there are segments of Palestine society and Arabs who are NOT in this to fight for the Palestinian cause but of their own interests. One of interviewees of Olson said:

The uncomfortable truth is that the Palestinian Authority (PA) don’t have to live under the same occupation we’re living under. They collaborate with the Israelis because its’ the only way they can keep their positions of power. Some of them spend their weekends dancing and drinking with Israelis in West Jerusalem and Tel Aviv. The (Aid) money doesn’t get to the poor.

Jordan have no oil, no natural resources, but they are educated and some of us are very rich. how did they achieved all this? Jordan gets money from the West to keep them (the Palestinians), to deal with them, to accept them and be quiet about them. Not out loud, but secretly, the Jordanian government supported the war in Iraq. So did the Egyptian government. And they both made separate peace deals with Israel without demanding justice for Palestinians. The Americans pay both of them to keep quiet about Palestinian rights. After Israel, it turns out, Jordan has the most per capita American foreign aid in the world; Egypt is second to Israel in absolute terms.

I was told by the taxi driver that it was a member of the Palestinian Authority that sold the cements to the Israeli company to build the Wall. Apparently it is a well known fact, and this was also echoed in Olson’s book.

All what I have read wasn’t viscerally shocking until I saw this map at the end of the book and I involuntarily gave a big gasp when I saw the extent of the ploy to reduce Palestinian land to nothing:

Noticed how Palestinian land has dwindled since Balfour Treaty 1946.

Olson said : Many have taken the view that Palestinian should have taken the non-violent route to a better question might have been, “Why does the world  demand nonviolence from Palestinians and then totally ignore them unless they do something violent?”

Thanks to the book, I now understand where the region is going……..

This is not a travelogue but a wide ranging book that covers politics, travel journals and years of living in a foreign land. If I am to sum it up I would say it is part travelogue and major part a support for Palestinian cause; and this book is a great introduction to a very complex political Israel-Palestinian issue. It serves to bring greater understanding about the people and the land.

The Holy Land brought out the best and the worst in people. It was inspiring and beautiful and terrifying and horrifying in equal measures. the absurd and the sublime constantly together. … Just like life, only compressed and made quick and urgent. This, I think, was one of the main reasons why we fell for it so hard. Because it never for a moment permitted us the luxury of forgetting.

One of the biggest threats to peace all over the world is how people get so identified with the stories in their heads, they become unwilling or unable to deal with reality as it actually occurs. I think it is always important to read books like this and eradicate whatever blind spots that we may have and take us closer to the truth.

I thank the publisher for sending me the review copy (ARC) via NetGalley, in exchange for an honest opinion.

Pamela Olson grew up in small town Oklahoma and  studied physics and political science at Stanford University. She lived in Ramallah, Palestine, for two years, during which she served as head writer and editor for the Palestine Monitor and as foreign press coordinator for Dr. Mustafa Barghouti’s 2005 presidential campaign. Dr. Barghouti cofounded a policitcal party, Al Mubadara (The Palestinian National Initiative) in 2002.

With dizzying speed she found herself attending Yasser Arafat’s funeral, tour-guiding Israeli friends around the West Bank, dating a Palestinian from a conservative village, being held at gunpoint and injured by a stun grenade, and witnessing the 2005 Disengagement from inside the Gaza Strip.and confusion.

In January 2006, she moved to Washington DC and worked at a Defense Department think tank to try to bring what she had learned to the halls of power. She is currently working on a sequel to Fast Times in Palestine called Palestine D.C.

A bookaholic that went out of control.... I eat, sleep and breathe books. Well, lately I do other stuff.
View all posts by JoV »
« The People of Forever Are Not Afraid by Shani Boianjiu
Lust, Caution by Eileen Chang (A book and movie review) »

12 thoughts on “Fast Times in Palestine by Pamela Olson”