As the sun comes out more often and spring is here, so are tons of new books that are published and due to publish in both sides of the Atlantic USA and UK this season.

I may or may not be able to read all of them but I thought it is only good manners that I officially thank the publishers great generousity and introduce you to some of the new books I have received for the past 2 months. 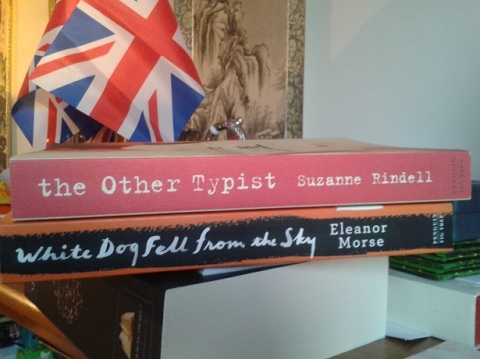 I thank Penguin UK for sending me these two books:

The Other Typist by Suzanne Rindell

New York City, 1924. Rose Baker is an orphaned young woman working for her bread as a typist in a police precinct on the lower East Side. Every day Rose transcribes the confessions of the gangsters and murderers that pass through the precinct. While she may disapprove of the details, she prides herself on typing up the goriest of crimes without batting an eyelid.

But when the captivating Odalie begins work at the precinct Rose finds herself falling under the new typist’s spell. As do her bosses, the buttoned up Lieutenant Detective and the fatherly Sergeant. As the two girls’ friendship blossoms and they flit between the sparkling underworld of speakeasies by night, and their work at the precinct by day, it is not long before Rose’s fascination for her new colleague turns to obsession. But just who is the real Odalie, and how far will Rose go to find out?

White Dog Fell From the Sky by Eleanor Morse

Botswana, 1976. Isaac Muthethe thinks that he is dead. Forced to flee his country after witnessing a friend murdered by white members of the South African Defense Force, he finds himself, for the first time, in a country without apartheid. Smuggled across the border from South Africa in a hearse, buried in a coffin, he awakens covered in dust, staring at blue sky and the face of White Dog.

Walking along the road into Gaborone, Botswana’s capital, White Dog following close behind, a chance encounter with an old school acquaintance changes the course of Isaac’s life – as does the job he finds as gardener for a young American woman, Alice Mendelssohn, who has abandoned her Ph.D. studies in order to follow her husband to Africa. But when Isaac goes missing and Alice goes searching for him, what she finds out will change her life and inextricably bind her to this sunburned, beautiful land.

There were also many new books that came streaming into my Kindle this season. Here are some of them. The covers may not be the same of those published in the UK. 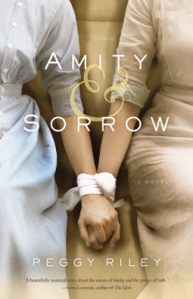 Amity and Sorrow by Peggy Riley

A mother and her two teenage daughters escape a cult and seek a new beginning in this unforgettable story about belief and redemption. I heard so much about this book and I hope to read it. 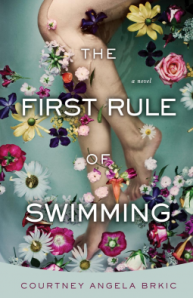 The First Rule of Swimming by Courtney Angela Brkic

When Magdalena learns that her younger sister has disappeared, she does not immediately panic. A free-spirit, Jadranka has always been prone to mysterious absences and she has never seen a future on Rosmarina, the isolated Croatian island where their family has lived for generations. But when weeks pass with no word, Magdalena leaves behind her Adriatic home and sets off to New York to find her sister.

Magdalena’s search begins to unspool the dark history of their family: from the brother and sister who fought as partisans during WWII, to their children, forced to make devastating choices under the pall of the Soviet era; the sisters at the center of the novel, who carry the family’s secrets in their blood. 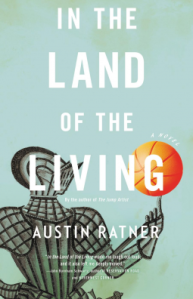 The Land of the Living by Austin Ratner

Isidore is a brilliant young man, driven in equal measure by grief at his young mother’s death, rage at his distant, abusive father, and his own fierce ambitions. When Isidore becomes a doctor, and a father himself, the cycle of grief continues, and soon it is his son Leo who is left behind too young, also grown to be a doctor. The story becomes Leo’s, an alternately heartbreaking and hilarious account of his cross-country road trip with his younger brother as they try to understand their family, their relationship, and their own futures. 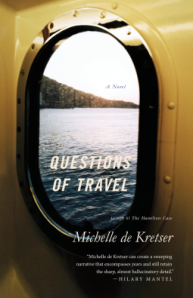 Questions of Travel by Michelle de Krestser
Laura travels the world before returning to Sydney, where she works for a publisher of travel guides. Ravi dreams of being a tourist until he is driven from Sri Lanka by devastating events. An enthralling array of people, places and stories surround these superbly drawn characters – from Theo, whose life plays out in the long shadow of the past, to Hana, an Ethiopian woman determined to reinvent herself. Michelle de Kretser illuminates travel, work and modern dreams in this brilliant evocation of the way we live now. Questions of Travel is infused with wit, imagination, uncanny common sense and a deep understanding of what makes us tick.

I saw this at the library a few days ago and I thought it sounds interesting. 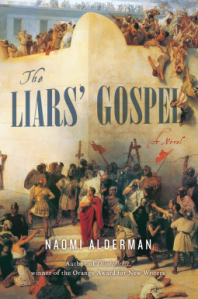 The Liar’s Gospel by Naomi Alderman

An award-winning author re-imagines Jesus’s life through the eyes of the four people closest to him amidst a backdrop of massacres, riots, and human betrayal. 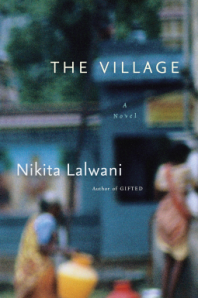 The Village by Nikita Lalwani
On a winter morning Ray Bhullar arrives at the gates of an Indian village. She is here to make a film. But this will be no ordinary tale about India – for this is no ordinary village. It is an open prison, inhabited by murderers. An apparent innocent among the guilty, Ray tries hard to be accepted. But the longer she and the rest of the crew stay, the more the need for drama increases. Soon the fragile peace of the village will be shattered and, despite Ray’s seemingly good intentions, the motives of the visitors and the lives of the inhabitants will be terrifyingly, brutally exposed. 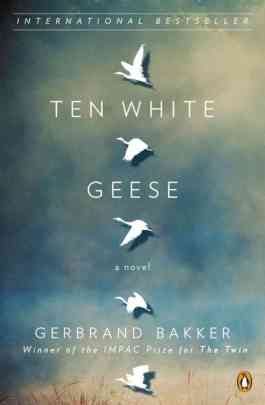 A woman rents a remote farm in rural Wales. She says her name is Emilie. An Emily Dickinson scholar, she has fled Amsterdam, having just confessed to an affair. On the farm she finds ten geese. One by one they disappear. Who is this woman? Will her husband manage to find her? The young man who stays the night: why won’t he leave? And the vanishing geese?
Set against a stark and pristine landscape, and with a seductive blend of solace and menace, this novel of stealth intrigue summons from a woman’s silent longing fugitive moments of profound beauty and compassion.

I read so many good things about Dutch author Gerbrand Bakker. I hope to start reading his new novel soon. 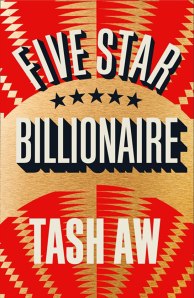 Five Star Billionaire by Tash Aw
Justin is from a family of successful property developers. Phoebe has come to China buoyed with hope, but her dreams are shattered within hours as the job she has come for seems never to have existed. Gary is a successful pop artist, but his fans and marketing machine disappear after a bar-room brawl. Yinghui has businesses that are going well but must make decisions about her life. And then there is Walter, the shadowy billionaire, ruthless and manipulative, ultimately alone in the world.

In ‘Five Star Billionaire’, Tash Aw charts the weave of their journeys in the new China, counterpointing their adventures with the old life they have left behind in Malaysia. The result is a brilliant examination of the migrations that are shaping this dazzling new city, and their effect on these individual lives.

I read the last two novels of Tash Aw and I am looking forward to reading this one. 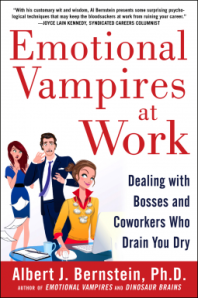 Best-selling author Albert J. Bernstein helped thousands of people deal with the dangerously stupid at work in Dinosaur Brains. In Emotional Vampires he goes even further to protect unsuspecting mortals from more devious and harmful creatures vampires ready to bite, suck, and kill the emotional and psychological wellbeing of their victims. Like the fabled demons, these vampires come in many shapes: -The living dead who think their “talents” place them above the laws of nature-Lords of darkness with huge egos and tiny consciences-Scary monsters who use their tempers in the same way terrorists use bombs-Blood-suckers who think others were created for their convenience. Emotional Vampires tells readers how to spot a vampire in their lives, which defense strategies to employ to prevent one from striking, and what to do if and when they find themselves under attack.

I think I need to read this to get back my motivation to go to work every day! 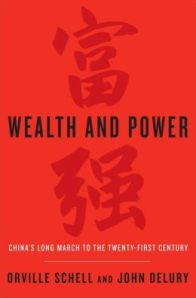 Wealth and Power by Orville Schell and John Delury
Through a series of lively and absorbing portraits of iconic modern Chinese leaders and thinkers, two of today’s foremost specialists on China provide a panoramic narrative of this country’s rise to preeminence that is at once analytical and personal. How did a nation, after a long and painful period of dynastic decline, intellectual upheaval, foreign occupation, civil war, and revolution, manage to burst forth onto the world stage with such an impressive run of hyperdevelopment and wealth creation—culminating in the extraordinary dynamism of China today?

So there you have it. Some 11 books out of the many that I have received.

Which of these books draw your interest?

A bookaholic that went out of control.... I eat, sleep and breathe books. Well, lately I do other stuff.
View all posts by JoV »
« A visit to Wadi Rum and Petra in Jordan
A little update… »

12 thoughts on “New books from publishers”