The Fall of the Stone City by Ismail Kadare

In September 1943, German soldiers advance on the ancient gates of Gjirokastër, Albania. It is the first step in a carefully planned invasion. But once at the mouth of the city, the troops are taken aback by an act of rebellion that leaves the citizens fearful of bloody reprisals.

Colonel Fritz von Schwabe is about to lead his troop to attack the city but remembers his University friend, Dr. Gurameto, a surgeon and a gynaecologist. In the town square, the Nazi Colonel Fritz greets his former classmate warmly; in return, Dr. Gurameto invites him to dinner. The very next day, the Colonel not only honour his promise to release the hostage, including a Jew, and also retreat from the city.

The dinner at Dr. Gurameto’s house changes the course of events in 20th century Europe. But as the citizens of Gjirokastër celebrate their hero, a conspiracy surfaces which leads some to place Gurameto – and the stone city – at the heart of a plot to undermine Socialism. What exactly took place behind the close doors at Dr. Gurameto’s home? 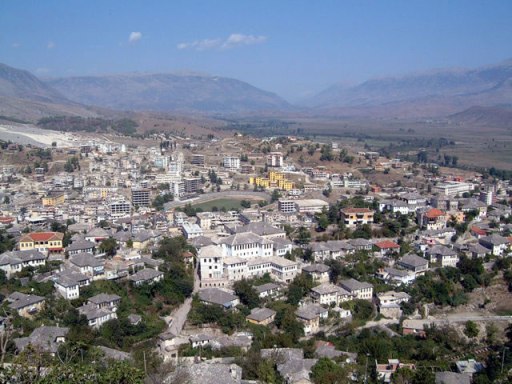 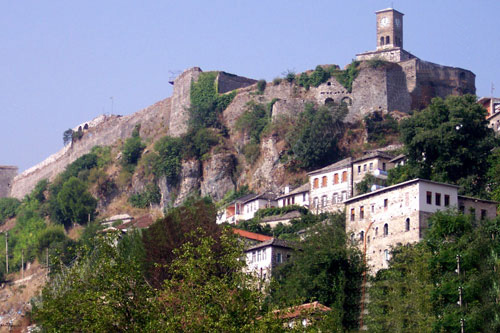 I haven’t read a book about Albania and I am embarrass to admit I couldn’t pin down exactly where Albania is! I have long heard about Ismail Kadare and this recent book is set in his home city of Gjirokastrës in South Albania. The first impression I get of The Fall of the Stone City is that it opens with a satirical prose about the current affair. Imagine two unknown aircraft dropped thousands of leaflets over Gjirokastër in two languages, German and Albanian to provide advance notice to an attack and the ladies who collapsed in the greetings of “Comrades”. The book also infuse a feeling of magic realism with legends and dreams and mystical ghost. Every sentence was packed to punch, saying just enough to convey the plot with intrigue and hold my interest. I love it when a short book manage to convey so much!

Typical of a change of rulers and ideologies, past beliefs and events are subject to scrutiny. Decisions that Dr. Gurameto made based on the circumstances in the past with the Germans became a dubious act under Stalin’s rule. The two investigators Shaqo Mezini and Arian Ciu was tasked to interrogate the doctors and things turn a darker with series of interrogation and torture. Big Dr. Gurameto was accused of death of 1,000 in his operating table but Little Dr. Gurameto recorded only less than 1,000. As a statistician, it is a traversity to compare figure without regards to the total population. Big Dr. Gurameto operates more than his little counterpart, so his % error rate obviously applies to a bigger number!

Anyway, that’s besides the point of reviewing this book. There were lots more plot and twists revealed that will keep you on your toes. A small city caught in between the big powers. The people of Gjirokastër has to evaluate their own positions and pledge their allegiance. The prose is written in both formal and also ludicrous manner that makes me smile and at the same time sad with what befall on Big Dr. Gurameto at the end. So if you read this 168-page book, I promise you it will not be a waste of your time.

I will be interested to read more of Kadare novels.

Other views about the book:

Stu@Winston’s dad: I felt Kadare’s writing follows better in this book sure that is due the nature of it being a direct translation .But part of me thing that fact this is published after the Albanian regime has fallen Kadare is free to speak about past events than before .

Tony’s Reading List: The Fall of the Stone City is a superb book, short but packed with intrigue and interest.

Ismail Kadare (born 28 January 1936; pronounced [ismaˈil kadaˈɾe], also spelled Kadaré) is an Albanian writer. He is known for his novels, although he was first noticed for his poetry collections. He has been a leading literary figure in his own country since the 1960s. In the 1960s he focused on short stories until the publication of his first novel, The General of the Dead Army. In 1996 he became a lifetime member of the Academy of Moral and Political Sciences of France. In 1992, he was awarded the Prix mondial Cino Del Duca; in 2005, he won the inaugural Man Booker International Prize and in 2009 the Prince of Asturias Award of Arts. He has divided his time between Albania and France since 1990. Kadare has been a Nobel Prize in Literature candidate several times. He began writing very young, in the mid-1950s. His works have been published in about thirty languages.

Ismail Kadare was born on 28 January 1936 in Gjirokastër, Albanian Kingdom. He attended primary and secondary schools in Gjirokastër and he studied languages and literature at the Faculty of History and Philology of the University of Tirana. In 1956 Kadare received a teacher’s diploma. He also studied at the Maxim Gorky Literature Institute in Moscow.

Kadare served as a member of the Albanian parliament during Communist rule from 1970 until 1982 and was permitted to travel and publish abroad. Kadare started his career very young and has a large body of work published under his name.

A bookaholic that went out of control.... I eat, sleep and breathe books. Well, lately I do other stuff.
View all posts by JoV »
« Of Fanaticism and Cult
The General: The Ordinary Man Who Challenged Guantánamo by Ahmed Errachidi »