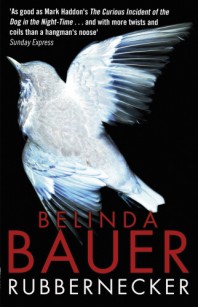 Rubbernecking is the act of gawking at something of interest. The term rubbernecking refers to the craning of a person’s neck in order to get a better view. Rubbernecking has also been described as a human trait that is associated with morbid curiosity.

This is my first novel by Belinda Bauer, and the fourth for Bauer. It talks about Patrick who is has Asperger’s syndrome, the eponymous rubbernecker. Unable to read emotions and unable to discern metaphor nor cues. Ever since his father died in a car accident as a result of saving him from an oncoming car, Patrick has been obsessed with death. Patrick obsession with death prompted him to study anatomy at university to understand what happens when people cease to be (and obviously ended up disappointed because we are only left with a shell of a body when we die). While practising dissecting a corpose, Patrick came across a corpse which died of a cause that is different from what is being described on the record. Patrick’s world is black and white and couldn’t understand why there would be people who is trying to stop him from finding the truth about the corpse.

You will be surprised that along Patrick’s story there are two more stories that run parallel. Meanwhile, lying speechless and motionless in the neurological ward meant for comatose patients, Sam Galen believes that he has witnessed a doctor murdering the man in the next bed but is unable to tell anybody about it because though his mind is lucid, his body is unable to express nor react to his mind’s demands… The third story, which is rather a queer one, was a storyline involving a lazy and self-centred nurse who seduces a patient’s husband. Other reviews said at the end of this book, Bauer draws all three strands of these stories together but I must have missed something as I couldn’t find the value of the story of a self-centred nurse fit into any main plot.

It is interesting and disturbing experience to read so detailed about a forensic procedure. Once you know that Patrick has Asperger, you can empathise why he did the things he did and sometimes I doubt myself if I do have the Asperger syndrome as I encouraged Patrick’s action and was cheering for him to get to the bottom of the truth! Besides the suspense of a crime, the novel also brought out Patrick’s personal life and his inner world very well. Not as good as the marketing blurbs would say it is comparable to The Curious Incident of the Dog in the Night Time by Mark Haddon (which I wrote a fantastic review of the book but in the early days of my blog, no one commented on it!. 😉 ) because nothing will compare to The Curious Incident of the Dog in the Night Time! but I feel sorry for Patrick’s mother who is burdened by Patrick’s autism, rejected him from birth and wanted him dead.

I like that this novel offers some hope in the end. Patrick beginning to find it easier to decode human behaviour and learn to get along with his mother. In my The Curious Incident of the Dog in the Night Time review I mentioned in an autistic protagonist world “His world is an honest one, void of emotions, beautiful yet precarious.” This still rings true for Patrick in the Rubbernecker. Many books these days write about the experience of an autistic person, which in a few reviews’ time I will write about “The Rosie Project by Grame Simsion” who also has a protagonist with Asperger’s syndrome, in different settings and genre. It would be interesting to compare if the experience of a person with Asperger’s is consistent and the same for the books that I have read.

In terms of crime fiction, Rubbermecker is not in the same league as the Scandinavian noir crime writers nor but a thriller with a heart? This made the mark…. and if you are not the sentimental sort, you may learn about the forensic procedure (every body part is taken apart, labelled and put it back together), what happens to a human body when it is dead and understand that it is not easy to severe a body part from a human body. You need to have a strong stomach occasionally because the description is graphic.

I enjoyed it and I hope to read Blackland one day!

I thank publisher and Netgalley for offering me a free review copy. 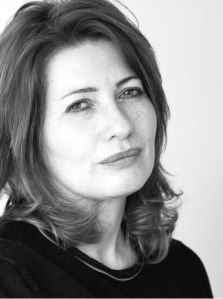 Belinda Bauer grew up in England and South Africa. She has worked as a journalist and screenwriter and her script The Locker Room earned her the Carl Foreman/Bafta Award for Young British Screenwriters.

With her first novel, Blacklands, Belinda won the CWA Gold Dagger for Crime Novel of the Year. Her second and third novels, Darkside and Finders Keepers, were highly acclaimed, and she was shortlisted for the CWA Dagger in the Library Award 2012 for her entire body of work. Rubbernecker is Belinda’s latest novel.

Belinda is a repeat guest on Front Row and regularly appears at Harrogate Crime Festival. She lives in Wales.

A bookaholic that went out of control.... I eat, sleep and breathe books. Well, lately I do other stuff.
View all posts by JoV »
« Americanah by Chimamanda Ngozi Adichie
The Shortlist »