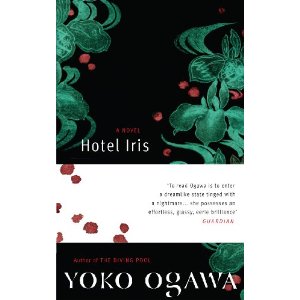 17-year-old Mari is something of a Cinderella figure. Her dad dies a violent death when she is only eight years old and left her in the sole custody of her money-grubbing mother who works poor Mari like a slave in the upkeep of their shabby hotel. The Hotel Iris is a rundown hotel with only one seaside view, frequented in the off-season by prostitutes and only bustling in the sweltering three summer months. Mari first spies her transformative figure in her life–a man fifty years her senior who got into a raucous fight with a prostitute in the hotel. Transfixed by his commanding voice, Mari follows the man the next day as he performs errands in town. When he confronts her, the two strike up a strange friendship.

The man (very common in Ogawa’s novel not to have a name for her characters) lives on a small island where he works translating Russian texts and a Russian novel which coincidentally has a character named Marie. Their subsequent rendezvous is preceded by long love letters by the translator and she always make up lies to go out at their appointed dates. In the seaside town he treats her with quiet deference, but when Mari visits his small, austere home on the island she undergoes a bizarre experience.

It’s a short book, so I’ll stop here and not introduce any spoilers if you may wish to read the book in the future.

This question always pop up on my head when I read a book. Perhaps it started with the Twilight Saga. Why is it that we always rate a movie but not a book? Personally I find the images conjure by reading a text is perhaps as vivid as watching a video. In this instance, this book deserves this rating according to the British Board of film classification:

I suppose I set myself up for a horrific reading experience before I read the book, so when the horrific scenes actually happened, I could stomach it, but the final scene is still one that left my heart palpitating with anxiety.

The introduction of a nephew in the story lulled me into a false sense of security, wonder perhaps things are settled into normality with a third party in the picture. I think the nephew interlude was just a distraction to reader to contrast how a normal relationship should be as compared to the perverse one that Mari is addicted to.

My take-away from the book is some inkling on why man and woman subjected themselves to such relationship. We, as a reader, see what Mari can’t see, even as we accept the savage doom of their romance. Her mother, always bragging about Mari’s beauty, make her believes she is ugly and unworthy of any love, thus succumb to a perverse relationship.

Ogawa is a very good writer. Clear, precise and spot-on; and translator Stephen Snyder has done a marvelous job giving Mari’s Japanese voice into smooth, melancholic, rhythmic sentences that any non-Japanese reader can relate to.

I started with her hopeful The Housekeeper + The Professor and then move on to her darker The Diving Pool and now in her darkest still in Hotel Iris. Hotel Iris is not for everyone. That’s how reading goes, sometimes we read stuff that is uncomfortable to us to challenge our own  reactions to such material. Proceed with caution. You are warned about this one.

I am reading this one for J-Lit 4.

A bookaholic that went out of control.... I eat, sleep and breathe books. Well, lately I do other stuff.
View all posts by JoV »
« Siddhartha by Hermann Hesse
Sputnik Sweetheart by Haruki Murakami »