My Name is Red by Orhan Pamuk 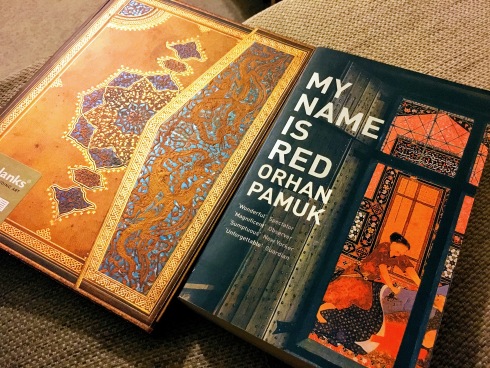 With my blank notebook of Safavid Art. The borders and gild work of motifs would have been the expertise of Miniaturist Elegant Effendi, the murder victim in the novel.

My Name is Red has been sitting on my shelf since late 2009, the year I bought many of my first novels into my collections in the UK. 7.5 years…… Sometimes that’s how long a book sat on the shelf of book lovers before it is being picked up and read cover to cover. Every book beckons at its own time.

It is through sheer serendipity when I saw the book sat on my friend’s coffee table on Facebook page, so I suggested that we should finish the book together. Reading, reviewing and blogging about a book these days on my busy schedule has become a luxury. One thing with me though when I promise or made a commitment to someone, I stick to it. I’d rather let myself down than letting other people down.

Far from fulfilling my reading challenge of reading 4 books a month, after 18 days and 500 pages later, I finished My Name is Red and wow, I came to the book thinking it’s going to be dry and hard going, and to my surprise it was a multifaceted and a philosophical murder thriller. Only a thoughtful review from me would do the book justice. So here goes.

Alif: Painting brings to life what the mind sees, as a feast for the eyes.

Lam: What the eye sees in the world enters the painting to the degree that it serves the mind.

Mim: Consequently, beauty is the eye discovering in our world what the mind already knows. – Page 341, I will be called the Murderer

At the higher level, the novel is constructed around the clash between two views of artistic meanings, which is also a chasm between two world civilisations, the East (the Persian art) and the West (The Frankish art, specifically the Venetian).

It is late 16th century Constantinople (Istanbul), the Ottoman Empire is in decline with counterfeit Venetian coins flooding the market and the economy is in inflation. The Venetian art, a novelty in Ottoman Empire then is represented by portraits of faces set on achieving death-defying immortality through realism by the colour palette. On the other hand is the tradition established in Herat and Tabriz which seeks to record the objective truth as it might appear to Allah. An icon or a face that inspires awe is a heresy and equates to idolatry and such practice is prohibited in Islam.

The Blue Mosque in Istanbul, Turkey

The awe inspiring interior of the Blue Mosque

Motivated to demonstrate renewed awe and revival of the Ottoman wealth, military and spiritual strength to the Venetian Doges or a penchant for beautiful art expression of the Franks; the Sultan secretly commissioned a group of miniaturists, to depict the Ottoman’s life as it seems to the individual eye. The Secret Project incites suspicions conflict amongst the miniaturists, as they were asked to complete the piece individually and at home, and only the Master Miniaturist have a grasp of the final outcome. As an experienced Project Manager, we know that the lack of transparency breeds division and contempt and we all can predict the success/ failure rate of such project. 🙂

At the story level, My Name is Red has a colourful cast of characters (see Wikipedia for full list:  https://en.wikipedia.org/wiki/My_Name_Is_Red ). It is a love story and also rivalry within the Miniaturists fraternity. In the centre of the story is Black, a failed illustrator who has spent 12 years in the eastern provinces of the Ottoman Empire after falling in love but rejected by his beautiful cousin, Shekure. Returning to his native Constantinople in the middle of a bleak winter, he finds everything changed. Shekure, married and widowed in his absence, is once again looking for a husband. Meanwhile, her father, Black’s uncle, Eniste Effendi is the master that the Sultan has commissioned of the secret project, Eniste wants Black to complete the writing to fit the illustrations. The four accomplished Miniaturists nicknamed Elegant, Olive, Butterfly and Stork were part of the project, unfortunately at the start of the story, Elegant’s body is found at the bottom of the well and soon an important figure of the project is also murdered. It is an inside job. Black is implicated and tasked to find the killer in 3 days, in addition to winning his cousin Shekure back. Add on to the complication, as a widow, Shekure is protected by the missing husband’s family, and the brother-in-law wants Shekure for his own.

My Name is Red ‘s chapters are organised around individual perspective; each chapter offers the varying first-person truths experienced by the characters, Black, Shekure, Uncle Eniste, Esther and also the Murderer. Even non-human objects are given a voice: a dog, a horse, a gold coin, the dead, Death and the colour Red. Pamuk narrated each individual account by injecting satire and humour, with many insidious thoughts that are not apparent between conversations. Readers can get into the heads of the suspects and the murderer and try to find out who dunnit?

Personal style and signature is prohibited in the Islamic art. Style is scoffed at and it is considered a defect. The irony is that the murderer betrays himself by a distinctive and detectable artistic style that proves his undoing. In order to track down the origin of style, Black talks to the Miniaturists, hanging around in the coffee house, engaging in lengthy discourse about the art of Ottoman and Herat with Master Osman, poring over the priceless illuminated manuscripts in the Sultan’s Treasury….. and because I walked the Topkapi Palaces and went to Istanbul in Nov 2015, the scenes painted in book are vivid to me. The vaulted door of the Treasury, the Golden Horn, the harbour I have seen them all.

I have seen more of the European and Chinese arts but less of the Persian or Islamic Arts. I have learned so much about Islamic art in this novel. Pamuk took me into the fascinating world of Islamic art, in which Western belief in art no longer make sense. Nothing could be more fundamental to an understanding of Western art than the concept of style. Style is, after all, the true expression of an artist’s unique perspective, like Van Gogh, Picasso etc. We distinctively knew the style that attributed to the artist. The issue or the beauty of a crossroad city like Istanbul is that there will be an influx and confluence of new ideas from both East and West. Most new ideas are foreign and challenged our conventional thinking. How much of traditional thinking we should hold on to and how much should we let go when the world around us is changing?

Pamuk’s characters are usually tragic, his female characters fickle and unlikeable. The characters of Red is no different. From his novels Snow and Museum of Innocence you know that the characters drawn under his pen will never be happy. A sense of lament for the end of Black and the end of the Miniaturists’ careers with the advent of Frankish art. There is no escape from the new world’s advance through history. But love endures, expressed in different ways – like the Persian art translated by the Turks; and then with love we embrace the new world’s ideas and try to mesh them up with our old world’s beliefs and we create something unique and different which distinctively becomes our style.

The beauty and mystery of this world only emerges through affection, attention, interest and compassion; if you want to live in that paradise where happy mares and stallions live, open your eyes wide and actually see this world by attending to its colors, details and irony. – page 343

“To God belongs the east and the west,” says the Koran. In this rare and wonderful gem of novel, Pamuk proves not only to be a great novelist of emotions and feelings of an Istanbulian as in the Museum of Innocence  but a tour de force of a historical fiction writer. My only shortcoming is that I am impatient and unsettled amidst daily demands and find the slow and deliberate illustrations of history of art a bit of a killjoy when what I really want to know is: who is the killer??!! 🙂

A historical fiction murder thriller with art discourse at the centre of the plot. Highly recommended.

Footnote: The literary world and myself expressed great thanks to the American Turkish translator Erdağ M. Göknar‘s whose translation of My Name Is Red gained Pamuk international recognition and contributed to his selection as Nobel laureate. Upon publication of the novel, Pamuk was described as a serious Nobel contender. I was at awe at the fluidity and beautiful English prose of this work that I noticed the great work of the Translator very early on. Erdağ M. Göknar deserves praise for the cool, smooth English in which he has rendered Pamuk’s finespun sentences, passionate art appreciations, sly pedantic debates, (and) eerie urban scenes.” Many readers and critics consider My Name Is Red to be Pamuk’s best work in English translation. My Name is Red won the IMPAC award in Dublin in 2003, where Göknar accepted the award on behalf of Pamuk. As is customary with this award, Göknar received a quarter share of the prize. (Text from Wikipedia)

For more, read my first review of Pamuk’s Snow and the review of Museum of Innocence which had me thinking about the protagonists for days after closing the last page of the book.

A bookaholic that went out of control.... I eat, sleep and breathe books. Well, lately I do other stuff.
View all posts by JoV »
« The Diary of a Young Girl, Anne Frank
The Fast and Clever Gut Diets »

8 thoughts on “My Name is Red by Orhan Pamuk”