He (another of Marukami’s story with a name for the protagonist) is a partner of an advertising firm, until one day a man showed up and demand to pay him for withdrawing the sheep ads from publication and gave him a mandate of one month to track down the chest-nut sheep with a star-shaped on its back.

His wife had left him, and he has a girlfriend with exquisite ears. A letter from his friend Rat who decide to go somewhere and had something that he couldn’t express. His wild sheep chase took an extraordinary turn as the chase led him to Sapporo, Hokkaido, where he knew about a right wing politico “The Boss”, The Boss’ religious chauffer, an ovine-obsessed professor who locked up in his room, the history of a village called Junitaki and a manic-depressive in a sheep outfit; in the hunt for a sheep, whose presence may or may not result in the running of the world. Brace yourself for surprises for another of Murakami’s unpredictable story of chasing a sheep.

Warning! Q&A may contain spoiler. If you do not wish to know, you can zoom straight to the end of my post to read what I think about the book.

I am reading this for Tanabata’s JLit Group discussion on 10 March 2010. Here are my responses to some discussion questions from Book Rags:

Throughout the novel, the mystical sheep invades several hosts for various purposes, such as building an empire and transportation to a new host. What or who do you think the sheep represents?

The clue is hidden somewhere between reference to page 10 to 124, the star-shaped sheep represents the Will. The basic mold of the Boss’ will was the star-stained sheep, the will was manifested in the boss. As it is said,

Wherever the sheep found a host and manifested itself, the host possessed the will to make a big difference, for example: the boss rise from mediocrity to organising the ranks behind him, Genghis Khan etc. It is sort of confirmed by the manic depressive sheep man. One of the causes of depression is thinking that the world and the difficulties faced is beyond one’s control. The sheep man is dressed in sheep perhaps with the hope of having some of the Will power rub on him, and also because of lack of will power, Rat decided it was the end of the road for him. As the sheep professor aptly said that:

Can you imagine what’s it’s like to be left with a solidarity thought when its embodiment has been pulled out from underneath you? 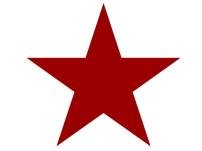 Initially when I looked at the Red star it sort of hinted at the Red communist star symbol and it is loosely associated with the mention of:

In the beginning, the world was chaos, and chaos is not mediocre. The mediocratisation began when people separated the means of production from daily life. For when Karl Marx posited the proletariat, he thereby cemented their mediocrity. And by the same token, I have high regard for Dostoyevsky. Nonetheless, I do not hold with Marxism. It is far too mediocre.

And it is also mentioned, Chiang-kai Shek’s eventual defeat meant the loss of Chinese Connection from USA and about the Ruso-Japanese war, and perhaps losing the will to go out for a war is maybe not such a bad thing, as in the case of the sheep man. And what about:

When the organization fall apart – a magnificent palace razed to make way for a public housing complex. A world of uniformity and certainty. Fair Allotment and all that. Think about it. The whole of Japan, leveled of mountains, coastlines or lakes, sprawling with uniform rows of public housing. Would that be a right thing? – pg 119 said the boss’ assistant.

Having a star-stained sheep to represent a Will (or a will to fight communism) is a clever analogy. A normal sheep has no will, it is a follower. But to have a sheep which stood out from the crowd represents some sort of revolutionary or rebellious will.

It’s just spurts of light bulb moments but there was no real convincing hypothesis about the Communist star and the sheep. Politically speaking, maybe the sheep is manifested with a will to fight communism. Maybe not.

In Chapter 24, the main character, his girlfriend, and the limo driver discuss the naming of things, places, and creatures. The limo driver believes names depend on physical fixation, free will, and an emotional attachment to humans. Why do you believe we name some areas and things, such as ball parks and boats, but not others?
I thought the discussion on naming was very intriguing. I believe why we gave ball parks and boats name but not airplanes for one simple reason, and that we named something when we feel affectionate towards it. We named our pets, we named out boats because we build and steer it and ball parks because we felt affectionate to the place we spent happy times in. We named an object because we love the object. We don’t named planes because they are built by big corporate and steered by a captain and we are told what to do when we are in the plane, which doesn’t quite promote ownership! 🙂

As the protagonist is an indifferent man, like all heroes in Murakami’s stories, he didn’t feel the need to name his cat. The cat was eventually given the name “Kipper” by the lovable chauffeur who telephoned God every night. 🙂

Not having a name for the character doesn’t bother me. Most of the time I have to try really hard to remember the names of the main characters in some of the stories I read, that they might as well be nameless. I think this nameless style is fine, but most people might find it annoying if they felt they need a name so that they can feel more invested in the main characters.
Do you believe the main character was selfish in his behavior when he accepted his girlfriend’s assistance on the sheep chase? If not, why do you believe he accepted her assistance, knowing she would be in danger?

I don’t think he is selfish. He was clueless as to how to find the sheep and the girlfriend seems to know more than him and sincere in helping him out. I don’t think she is in danger. I think she is part of the scheme to lure the main character to the Rat’s father’s house. Anyone, correct me if I’m wrong.

The Sheep Man is an interesting character; however, the novel does not clearly explain his origin. Who or what do you believe the Sheep Man represents within the novel?

The sheep man represents a weak will. A weak man that wanted so much to be strong (that’s why he wore the sheep costume), but yet is weak to become a better man.

Do you believe the main character changed over the course of the novel? If so, in what ways? If not, why do you believe he is unable to change, even in the face of his experiences?
I am not convinced if the main character changed. I think he just felt really sad for losing his friend. Other than that, as the book title implied “A Wild Goose Chase”.

I actually think A Wild Sheep Chase was far better than A Wind-up Bird Chronicle or Kafka on the Shore. A Wild Sheep Chase is bizarre but the stuff that he mentioned has a logical thread in it. I can’t quite take in Murakami’s later work of its bizarre-ness for the sake of being bizarre. Like Fish falling out from the sky, like doing some thinking down the well, it just didn’t make sense to me. Then again perhaps my thinking is too linear! It’s a minor flaw I am willing to forgive, I still love Murakami’s books. So I’ll be reading all of his books in my lifetime.

Overall it was a very entertaining read. Although the hiatus in between has more to do with my multiple priorities in life rather than disinterest that made me leave the book for a couple of days. Alfred Birnbaum as usual were superb, as he did the translation on my favourite “Hard-boiled Wonderland and the End of the World”. I am sure the following sentence was Birnbaum’s creation:

Because Japanese language would have been a string of independent words without much space in between anyway. You’ll be amazed how you can read sentences without space! Birnbaum’s translation is flawless and superb. The writing style of Murakami in this book is also clear and succinct. At 299 pages, it was a good read and thanks Tanabata once again to link the members up for a thought provoking discussion. Else I wouldn’t have dwell into the meaning of the elusive sheep!

I’ll leave you with two of my favourite quotes from the book:

I like that word Intercourse. It only poses a limited range of possibilities.

“What is this Will?” I asked.
“A concept that governs time, governs space, and governs possibility.”
“I don’t follow.” I said.
“Of course. Few can. Only the Boss had a virtually instinctual understanding of it. One might even go so far as to say he negated self-cognition, thereupon realizing in its place something entirely revolutionary. To put it in simple terms for you, his was a revolution of labour incorporating capital and capital incorporating labour”. – pg 119, boss’ assistant

My main take away from this book and my sincere wish to all who read it that may you possess the manifesto of the star-stained sheep to achieve great heights in life. I wish I possess it right now! So good luck everyone!

I am reading this for 2010 Global Reading Challenge – Asia and Animal III Challenge (book title with animal name in it).

A bookaholic that went out of control.... I eat, sleep and breathe books. Well, lately I do other stuff.
View all posts by JoV »
« I am in love with Edward
The Little Stranger by Sarah Waters »

13 thoughts on “A Wild Sheep Chase by Haruki Murakami”