Freedom : The Story of My Second Life by Malika Oufkir 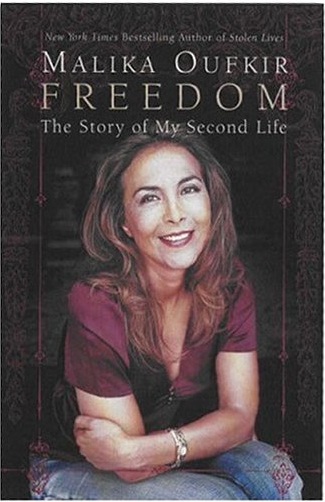 Telling my family’s story, which was linked to those of other political prisoners whose fates were now slowly being revealed, might help me move forward with my life. In writing Stolen Lives, the success of which I could not, of course, have foreseen, I exorcised the past, at least in part, but I also took up another burden: the role of victim. – page 107

La Prisonniere (US title: Stolen Lives), Malika Oufkir’s intensely moving account of her twenty years imprisoned in a desert jail in Morocco, was a surprise international best seller and the second non-fiction title ever selected for Oprah’s Book Club.

In her highly anticipated follow-up, Malika reflects on the life she lived before and during incarceration and how dramatically the world had changed when she emerged. Malika Oufkir was born into extreme privilege as the daughter of the king of Morocco’s closest aide, and she grew up in the palace as companion to the Moroccan princess. But in 1972, her life of luxury came to a crashing halt. Her father was executed for attempting to assassinate the king, and she and her family were locked away for two decades, the youngest brother was only 3 then. After a remarkable escape, Malika and her family returned to the world they’d left behind, only to find it transformed.

Why I read it: I was in awe of Malika Oufkir’s life in desert goal when I read her first book La Prisonniere : 20 years in a desert gaol. It is my desert island book and there were many questions I posed which I hope this sequel would gave me the answers.

I thought it is extremely difficult to be impartial about what I think about the book when I am deeply affected by Malika Oufkir’s plight. I think that’s a common problem with biography and memoir. If you read about a personality you really like or idolise, it doesn’t matter if the writing is bad, that’s why bad memoirs of famous personalities sell. However, I can assure you Malika’s memoir is honest and full of insights. The world seen from the eyes of someone who has been locked up for 20 years, it challenges our views about things that we took for granted in our everyday life.

Living for the first time as an adult, Malika writes candidly about adjusting to the world we take for granted, from negotiating ATMs to the excesses of shopping malls, the silliness of grand cuisine, to falling in love and sex. In La Prisonniere (US title: Stolen Lives), Malika mourned the children she was not having as her body wasted away in prison. When she is finally free, motherhood becomes crucial to Malika’s ability to fully live her life: she adopts first her niece, then a baby boy, Adam, from Morocco.

There are several scenes of humour albeit sad, for example when Malika spent half the day at the Post Office just because she doesn’t know that she should take a number and operate a ticket number dispenser machine. Or the time when she had to feign losing an earring to avoid the suspicion of being in the toilet for too long because she doesn’t know how to operate an automatic tap water without faucets.

What a terrible country,” exclaims a friend of a friend, shaking his head solemnly (when the friend knew about Malika’s plight)

What country is he talking about? Mine, undoubtedly, and in accents of horror, intending to please me. What does he know about Morocco,about my experience, about the light and shadow of the kingdom of a thousand flavours?… page 126.

Many people tend to read about awful news about people of the country and began to judge the country as a whole. Malika differentiates this by saying:

Morocco has remained for me a magic land, from which I draw my strength. I have accounts to settle only with its King. [page 118] I will love Morocco – I from whom it stole twenty years – and defend it against those who condemn it. My country is not its King. [page 129]

The only table where I’ve truly enjoyed myself since being freed (if you can call a mat lying on the ground a table) was in the desert of the Atlas region of Morocco, where the Bedouin, who are sparing of words, nourish themselves in silence on a handful of dates. To my mind, they have understood the real meaning of life. I am the daughter and granddaughter of Berbers; I feel more at ease with thrift than pointless indulgence. – page 102

What am I afraid of?… Perhaps innocence begets its own guilt, planting suspicion both in oneself and in the eyes of others. That fear of being punished for things I haven’t done, or haven’t done yet, intensified the hellish whirlwind of doubt. Like a battered child, I throw my arms up over my face, warding off both blows and caresses, in order not to see what awaits me …. – page 111

Once you spit out hatred, it weakens and evaporates, leaving you able to breathe again, free to love or to hate not on principle, but by choice. – page 227

Getting the final word in:

Malika Oufkir, born in 1953, now lives in Miami, Florida with her husband Eric and two children.

A bookaholic that went out of control.... I eat, sleep and breathe books. Well, lately I do other stuff.
View all posts by JoV »
« Arrow of God by Chinua Achebe
Man Booker Prize Longlist 2012 »

9 thoughts on “Freedom : The Story of My Second Life by Malika Oufkir”