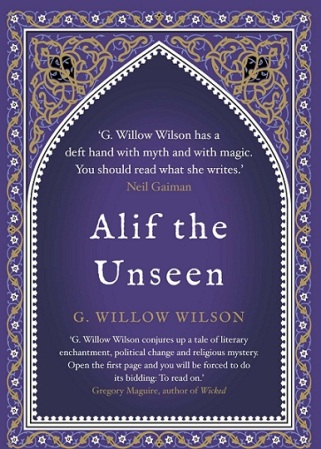 I borrowed this book from the library before it was announced as the Women Fiction Prize’s shortlist.

I need to forewarn that this book is part Harry Potterish, and in essence an Arabian night fantasy novel. I don’t read many fantasy novels, I try to avoid them but when I do it is because of curiousity (I finished all of Harry Potter’s books). I read G. Willow Wilson’s memoir The Butterfly Mosque in May 2011 and love it a lot. Wilson is a very perceptive and intelligent writer and I am eager to read her debut novel Alif the Unseen.

It begins with a 23-year-old man (boy!) who has a girl problem. He calls himself Alif (the first of Arabic alphabets), few people know his real name and he spends his days coding and writing software programmes to block security access and to protect his clients who want to bypass the censors, including political activists, dissidents and inevitably terrorists. When Alif meets the aristocratic Intisar, he believes he has found love. But their relationship has no future – Intisar is promised to another man and her family’s honour must be satisfied. 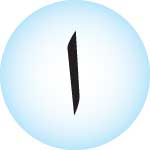 The Alif in Arabic Alphabet

As a heartbroken attempt to block further communication from Intisar, Alif wrote a programme that could recognise key strokes and word pattern used by an Internet user, identify Intisar’s and bar her from sending messages to him. Until a powerful force in the cyberspace “The Hand” got his hand on the code and Intisar sends the heartbroken Alif a mysterious book called Alf Yoem (entitled The Thousand and One Days), Alif’s life is thrown into disarray as he became a fugitive in both the corporeal and incorporeal worlds and brought many of his friends on the run with him.

Alif discovers that this parting gift is a door to another world – a world from a very different time, when old magic was in the ascendant and the djinn walked amongst us.

What is a jinn? Wikipedia says: 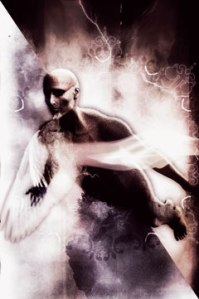 The jinn (Arabic: جن‎ ǧinn, singular جني ǧinnī; also spelled djinn), or genies, are spirits mentioned in the Qurʾān and Islamic theology who inhabit an unseen world in dimensions beyond the visible universe of humans. Together, the jinn, humans and angels make up the three sentient creations of God. The Qurʾan mentions that the jinn are made of a smokeless and “scorching fire”,and they have the physical property of weight. Like human beings, the jinn can also be good, evil, or neutrally benevolent and hence have freewill like humans and unlike angels. The jinn are mentioned frequently in the Qurʾan, and the 72nd surah is titled Sūrat al-Jinn.

Jinn is believed to live amongst us and can take the form of a human, animal and animated objects. Syaitan or iblis (the devil or demon) was born as Jinn who subsequently disobey Allah and is cast away from paradise. Similar to humans, jinn have free will allowing them to do as they choose (such as follow any religion). They are usually invisible to humans, and humans do not appear clearly to them. Jinn have the power to travel large distances at extreme speeds and are thought to live in remote areas, mountains, seas, trees, and the air, in their own communities. Like humans, jinn will also be judged on the Day of Judgment and will be sent to Paradise or Hell according to their deeds.

Wilson has maintained anonymity in the setting of the story. It is set in a middle eastern city but suspect it painted closely to Egypt where the author is based. We don’t know Alif’s real name and the American character convert’s name (but we all know it’s Wilson).  There are many computer jargon to start with, but I know enough about IP address, algorithms, firewalls and all that to be engaged in the war of the cyberspace.

“Belief,” said the man. “It doesn’t mean the same thing is used to, not for you. You have unlearned the hidden half of the world.”

“But the world is crawling with religious fanatics. Surely belief is thriving,” said Alif.

“Superstition is thriving. Pedantry is thriving. Sectarianism is thriving. Belief is dying out. To most of your people the djinn are paranoid fantasies who run around causing epilepsy and mental illness…… Wonder and awe have gone out of your religions. You are prepared to accept the irrational, but not the transcendent. And that, cousin, is why I can’t help you.” – page 299

For God also tells us that when you perform an action you believe to be a sin, it still counts as a sin even if it is proven to be permissible. Conscience. Conscience is the ultimate measure of man. – Sheikh, page 220

It is fast paced metaphysical thriller and convincing in the research of Alf Yeom (the book actually exists), Islamic theology and mystics, with political twist thrown into the mix. Wilson does a very clever parallel between real life and cyberspace (the contemporary dichotomy), and real life and the realm that the jinn resides (ancient dichotomy). The incorporeal word use for “unseen” is used metaphorically for political activists who have to camouflage themselves behind avatars and alias to remain “unseen” so that they could be honest about the state of the government, otherwise risk being hunted down and tortured in dark chambers by the state security men as some of the characters inevitably experienced.

Intertwined between chapters are small fables or excerpts from the Alf Yeom, where Princess Farukhuaz is entertained by her nursemaid’s stories, a taster of Scheherazade-like short stories in between the main story, which I like very much. I like that the book cross genres Arabic myth, religious beliefs, humour and action thrillers; bridging cultures and people. Ignore the swear words, this is an enjoyable and entertaining fantasy read but not sure if this would make it to the shortlist. I am stereotyping and I hope I am proven wrong.

Did I tell you I love the cover? It looks like a classical Arabic book. 😉

I first read G. Willow Wilson’s memoir The Butterfly Mosque and I am most touched and affected by it.

Alif the Unseen is longlisted in this year’s Women Fiction Prize (WFP) 2013.

A bookaholic that went out of control.... I eat, sleep and breathe books. Well, lately I do other stuff.
View all posts by JoV »
« The Blind Man’s Garden by Nadeem Aslam
Honour by Elif Şafak »

21 thoughts on “Alif the Unseen by G. Willow Wilson”