Medical students have it tough. Imagine dissecting your first corpse – and having to confess you’ve mislaid the head. And how do you convince a delusional man that his beautiful neighbour is not, in fact, colluding with him to kill her husband so that they can be together? Or explain to the widow of a near-attack patient that the barber shop her husband died in specialised in ‘backroom services’ not strictly on the price list? And that’s not to mention having, you know, a life – with all the attendant hells of the opposite sex, metaphysical turmoil and making the rent.

This scalpel-sharp collection of interwoven tales, Vincent Lam introduces to Ming, Fitzergerald (Fitz), Sri and Chen, and shows us the lives of the group of medical students saving lives. There are many thought provoking and heart wrenching piece of human dramas in this book. The episodes in How to get into Medical School I and II, Fitz was besotted with Ming and did all his best to get accepted in the same medical school as Ming, only to find Ming seeing someone new and someone her parents would approve of, Chen; have me felt sorry for Fitz. The final countdown and the emergency of a difficult child labour resonated deeply with my own personal experiences. A chapter of the expectations of a grandfather who expect his grandson Chen to predict when he will pass on.

She could not will her womb to stop, now that it had begun its crescendo dance of muscle movements. It was awakening into its final purpose. The birth of a baby, the death of pregnancy. Months ago, Janice had been amazed that it grew, that it claimed a mass which had never before been occupied in her body. Now the fleshy cradle had become aware of the being formed within and was trying to thrust it into the world. It was faithful to its program of bearing down, of pushing the head through thinning muscles of the pelvis.

There are inevitable tragedies in the medical drama. There are patient that wheeled into ER that the doctors are unable to save, Fitz on a cross America mission to bring a patient and his wife from the Latin America back to Florida for treatments and have to lie that the wife did the right thing by seeking local treatments first (in Night Flight), the SARS pandemic breakout that cause the death of Sri and putting Fitz life in danger.

A life committed in the doctor’s professions is a difficult and challenging life. It also tell us that underneath their white coats, doctors and interns are human, and as fallible and unpredictable as the rest of us; weighing the importance of a relationship versus needing the unwavering focus to get into medical schools, the need to fight fatigue and drive home safely after a night shift, and the threat of contracting a disease while working with patients etc…

What would he be if not a doctor? His self before becoming a physician seemed like a half-remembered, dreamed version of himself, a persona that was impossible to resume in his present life. Although he longed to shed the medical shell when he was alone, it was frightening to try to remember how to be anything else in the presence of others.

It is a thought provoking and heart palpitating read. Although the writer’s writing can be matter-a-fact-ly and splattered with mind boggling medical jargons and terminologies that not are easily grasp despite glossary included. 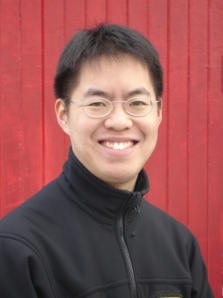 Vincent Lam (born September 5, 1974) is a Canadian writer and medical doctor. Born in London, Ontario and raised in Ottawa, his parents came to Canada from the Chinese expatriate community in Vietnam. He attended St. Pius X High School and did his medical training at the University of Toronto, graduating in 1999. He now works an emergency physician at Toronton East General Hospital and also does international air evacuation work and expedition medicine on Arctic and Antarctic ships.

Lam, who attended the Humber College School for Writers, continues to work on his first novel, Cholon, Near Forgotten. He currently lives with his wife and two sons in Toronto. ITV Studios, Global Entertainment recently has acquired a new medical drama for international distribution. see here.

A bookaholic that went out of control.... I eat, sleep and breathe books. Well, lately I do other stuff.
View all posts by JoV »
« The Girl on the Landing
This Blinding Absence of Light by Tahar Ben Jelloun »