It seems I can’t catch-up with my own reviews and wrap-up.

Yet I feel I need to do so.

It’s been a month of ad-hoc projects and uncertain weather. My boys and I took turn to fall ill in the cold snap. While we expect the weather to move towards warmer temperature one Sunday, I went out with a leather jacket without my scarf in the morning and came back shivering with cold in the afternoon under a blizzard. It is so bizarre, considering that we hardly have blizzard in the middle of the day in England.

I had a productive February reading-wise but had so many books going at one time that at one point I feel as if I’ll never be able to finish any. In the end I finished 5 books this month:

including the following unfinished pages:

That makes 538 pages of unfinished books read. I may have effectively finished about 7 books!

Anyway it’s just a number. Out of the 5, my favourite of the month are Balzac and the Little Chinese Seamstress and The Girl in Translation. Main criterion that qualifies as favourite was that I breezed through them but the other three were hard-going for me. I keep wishing for them to end!

Purchase of the month

There were so many book sales during the month that I lifted my book buying ban and got some books at a pittance.

From the top to bottom:

The Gift by Hafiz – a collection of Sufi poetry which no doubt will left me confounded.

Chasing the devils – On foor through Africa’s Killing Fields by Tim  Butcher – Read Blood River by same author of his track on road through the Congo river, this one is a on-road track through the most political volatile place on earth Sierra Leone and Liberia. I wouldn’t go where he had gone but I’ll be interested to read what his journey was like.

The Passage by Justin Cronin – requires no introduction, another book to add on my future quest for disaster books!

Through thick and thin by Gok Wan – Gok Wan is a famous image consultant and fashion designer in the UK (not sure if you heard about him over the pond?) but what made him so successful stemmed from his miserable early childhood of obesity. He was bullied and laughed at. If you ever see one of his TV series, aunty Gok (as he is fondly called) specialise in dressing women up from the high street brand, not the luxury brand and one won’t know the difference. With his glue gun and sewing skill he turns the most plain-looking clothes to an evening wear fit for a Versace catwalk. He is that good and a lot of women here love him because he not only dress-up the skinny catwalk model but he dresses-up women of all body shapes, take them shopping and transform them! 😀

My story from brick lane to dragon’s den by James Caan – I am a big fan of the Dragon’s Den UK programme and a greater fan of listening to business men who starts from nothing and became successful. James Caan was one of the investor for Dragon’s Den 2011.

The Family Orchard By Nomi Eve – speaks of a Jewish family migration to Israel. It was the illustration and humour that made me want this.

A Week in December by Sebastian Faulk – It’s Christmas, 2007 and the story follows characters who live in London, a professional footballer, a hedge fund manager, a student led astray by Islamist theory, a lawyer, and tube driver at the circle line, the novel pieces together the complex patterns and crossings of modern urban life … sounds great for a 75p hardback. 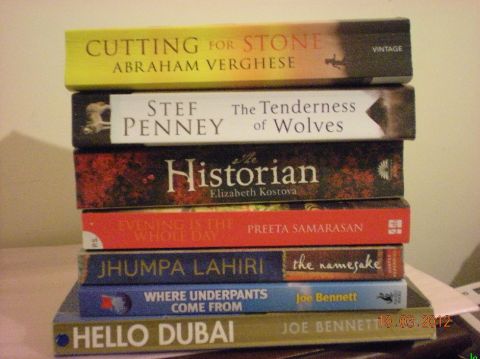 Cutting for Stone by Verghesse – I always wanted to read this one since it was first published. For such a big book it’s easier if I own a copy and savour it at my own pace…

The Tenderness of the Wolves by Stef Penney – The particular beautiful cover of this 2011 edition, with beautiful picture of a pack of wolves, made me buy it!

The Historian by Elizabeth Kostova – I have limited knowledge about the book and I think that’s the best way. I think it has something to do with vampires? 😉

Evening is the Whole Day by Preeta Samarasan – A post-colonial story about Malaya and an Indian family.

The Namesake by Jhumpa Lahiri – I read this before I started the blog and I really want to read it again.

Hello Dubai and Where Underpants come from – both written by Joe Bennett who talks about the world of High-flying Dubai and how and why Chinese made underpants are so cheap.

I forgot to add another two in the pile: 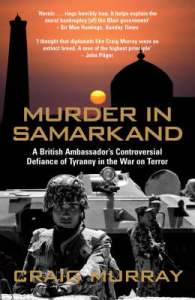 Mao’s last dancer by Li CunXin – There are many Chinese cultural revolution stories (I hope they can start exporting something different to the west soon!) at least this one is a biography of a state ballet dancer who had decided to defect from China. It was made into a movie too.

Murder in Sarakand – a British Ambassador’s controversial defiance of tyranny in the war on terror by Craig Murray – The title says it all doesn’t it? I’d love to read another conspiracy theory…

Have you read any of the above?

It’s almost spring! Plans? Eerrr… no plan for March. I can’t keep any of my plans at the moment but will endeavour to start reading those classic chunksters on my sidebar to meet first quarter end!

What about you? How are you doing so far in March?

A bookaholic that went out of control.... I eat, sleep and breathe books. Well, lately I do other stuff.
View all posts by JoV »
« Pure by Andrew Miller
Buddha in the Attic by Julie Otsuka »