Lust, Caution by Eileen Chang (A book and movie review)

It’s been a wish to read something by Eileen Chang for a long time and the impetus to read Lust, Caution was heightened by the prize winning movie directed by Ang Lee. I read the book, then watched the movie. 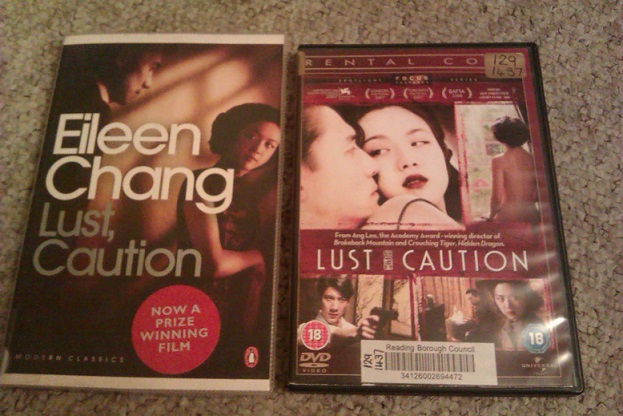 Eileen Chang’s novels write about the tensions set between men and women in love. Although set in a period where Shanghai is occupied by Japanese, I like that many of the short stories collection do not have a heavy political agenda about China. It was a welcome stray off the beaten path of stories about oppressed Communist China regime, defection and tribulations; which in recent years depict a one-dimensional picture of Chinese translated literature.

I am still amazed how director Ang Lee did an amazing job of making a movie out of a short story. It reminded me of the book and movie of The Curious Case of Benjamin Button. I think movie directors get so much out of short story as it gives them the liberty to fill in the gaps that a short story could never do.

As I talk about the storyline, I will be overlapping what I read in the book and saw in the movie. The movie is of course visually more powerful.

It is 1940’s Shanghai. Young, naïve and beautiful Jiazhi (in the movie spelt Chia Chi) spends her days playing mah-jong and drinking tea with high society ladies in Shanghai. While war is raging outside, the ladies talked about the carats of their diamond rings and who should do the rounds of banquet invitation next.

Jiazhi’s life is a front. A patriotic student radical posing as Mrs Mai, married to a businessman. Her mission is to seduce a powerful employee of the occupying government (a Chinese collaborator to the Japanese government, Mr. Yee) and lead him to the assassin’s bullet. The process took 2 years (in the book) and 3 years (in the movie) for Jiazhi to get acquainted and then earned Mr. Yee’s trust. Mr. Yee’s masochism shines through more in the movie, as heavy handling interrogation and torture is his speciality and he trusts no one. Not even his past mistresses.

Yet as Jiazhi waits for him to arrive to meet at their liaison, Jiazhi begins to wonder if she is cut out to be a femme fatale and coldly take Mr Yee to his death. Or is she beginning to fall in love with him?

The short story has managed to build the climax leading to Jiazhi’s trap, framing Mr. Yee for her colleagues’ ambush. I read the book, watched the movie and felt compelled to read the book again just to notice the details from the movie. I must say the movie brilliantly provides a better context and inner turmoil of Jiazhi. From the innocent young Jiazhi to the loss of her innocence and became a powdered-face, heavy make-up of Jiazhi’s double persona as Mrs. Mai, the transition is heart wrenching.

The movie portrays a sad case of a gender ruled mostly by heart and another by power.

He (Mr Yee) was not optimistic about the way the war was going, and he had no idea how it would turn out for him. But now that he had enjoyed the love of a beautiful woman, he could die happy – without regret. He could feel her shadow forever near him, comforting him. Even though she had hated him at the end, she had at least felt something. And now he possessed her utterly, primitively – as a hunter does his quarry, a tiger his kill. Alive, her body belonged to him; dead, she was his ghost. – page 35

Although the first Lust, Caution short story took a better part of my review, I thought Chang’s other short stories in the same book are just as good. I like the story Great Felicity, as a girl from a lower class prepare for her marriage to the upper echelon and invited critics from her in-laws. In Steamed Osmanthus Flower: Ah Xiao’s Unhappy Autumn is about the life of a live-in servant and her flamboyant western expatriate employer, how she has to be the conspirator to cover her employer’s back from a persistent admirer called Miss Li as she raises her son Baishun at the same time. Traces of Love is about a second wife Dunfeng who has to endure her husband’s loyalty to his first wife, who is ailing. While accepting that she married for money, all relationships are frayed and patched up, the women in Eileen Chang’s world, make the best of what they have got.

Lust, Caution is a powerful movie. The soundtrack by French composer Alexandre Desplat particularly the score Wong Chia Chi’s theme was used at another favourite movie of mine, a Spanish movie titled Biutiful played by Javier Bardem. Since Lust, Caution came first, I could only conclude that Biutiful decided to use the same musical score but interestingly the composer was cited as Gustavo Santaolalla. The more savvy youtube users have spotted that it was the Wong Chia Chi’s theme from Lust, Caution.

I thought the entire soundtrack of Lust, Caution was haunting and sublimed brilliant.

Compare the above or find the similarity with this movie soundtrack below!

Read the book. The book is only 159 pages including Editor’s afterword. Most rewarding of all, watch the movie.

The Asylum: The best tribute I can pay the stories in Lust, Caution is that although Chang’s style took some getting used to, I found myself wanting more and more as there were fewer and fewer left.

A movie review by Arti@Ripple Effects

She is noted for her fiction writings that deal with the tensions between men and women in love, and are considered by some scholars to be among the best Chinese literature of the period. Chang’s portrayal of life in 1940s Shanghai and Japanese-occupied Hong Kong is remarkable in its focus on everyday life and the absence of the political subtext which characterised many other writers of the period.  Poet and University of Southern California professor Dominic Cheung commented “had it not been for the political division between the Nationalist and Communist Chinese, she would have almost certainly won a Nobel Prize”.

Chang’s enormous popularity and famed image were in distinct contrast to her personal life, which was marred by disappointment, tragedy, increasing reclusiveness, and ultimately her sudden death from cardiovascular disease at age 74.

A bookaholic that went out of control.... I eat, sleep and breathe books. Well, lately I do other stuff.
View all posts by JoV »
« Fast Times in Palestine by Pamela Olson
The Unlikely Pilgrimage of Harold Fry by Rachel Joyce »

5 thoughts on “Lust, Caution by Eileen Chang (A book and movie review)”